I am writing to the single woman out there.  Men, please hear my thoughts and pay close attention.

I was searching YouTube tonight looking at marriage proposals online.  I can’t believe how many horrible proposals that I had to sit through to get to a seldom few good ones.  After seeing so many worthless proposals I have come to the conclusion that our fatherless, Jackass generation has bred a slew of uncreative, pathetic gimps who think marriage is all about themselves.  And the worst part of it is that all the girls said yes.  What the heck is going on?  Ladies, you deserve more!  Way more!

Ladies, getting married is the biggest decision of your life!  You will have to look at that guy for 60 years, so make sure you say yes to a guy that loves your heart and who has a larger vision for your lives than watching football this Sunday.

The whole idea of a proposal is this: a man humbly and vulnerably gets down on one knee and gives the woman all the power in the world. He asks, “Will you marry me?”  He empowers her to answer this question: “Am I man enough to provide everything that you need, to love and protect you for the rest of your life?  Will you be willing to come under my authority and be my wife?”  It is her decision whether the union will be made.  She makes the final decision.  A yes means that she wants to join this man in life, to become one flesh with him, to honor and respect him, and to submit to his Godly leadership for the rest of her life.  So many Christian women settle for a really nice guy instead of a truly powerful and courageous man.  This saddens me, and I am sure that it saddens God.

There are three essential things that should be in a marriage proposal!  If any of the following three things are not there when your man asks you the Big Question, then say “no”.  I am adamant about these three things for two reasons. One, you deserve them, and two you don’t want to spend the rest of your life telling the story of your lame proposal by your man.  If you do have an inkling that your man could grow a pair, offer you the life that you deserve, and you believe that God wants you to marry him despite his weak proposal you should gently say, “no” and then give him another chance at it so you don’t have to be embarrassed every time someone asks you how you were proposed to.  Just send him to this blog about proposing or have him call me and I will set him straight.

All three of these things should be within your standard for saying yes to your man’s proposal:

1.) Intentionality – The proposal must be intentional. I can’t tell you how many proposals that I have heard of where the guy put no thought whatsoever into putting together a plan on how he was going to propose.  I have talked with women who didn’t even get a proposal; they just went to the jewelry store together and picked a ring out.  Don’t be a control freak woman, let your man propose the old fashioned way.  If you want to have a legacy behind you then you must pick a man who seeks to live intentionally.  A man should only ever need to propose to one girl in his life so he should have plenty of time to think about how he is going to do it.  It is his responsibility to keep his elaborate plans a secret.  The level of his intentionality will determine his ability to keep you from ever guessing.  It’s one of those things that should be thought through weeks or even months in advance.  Don’t accept a random moment proposal.  You are worth the planning. 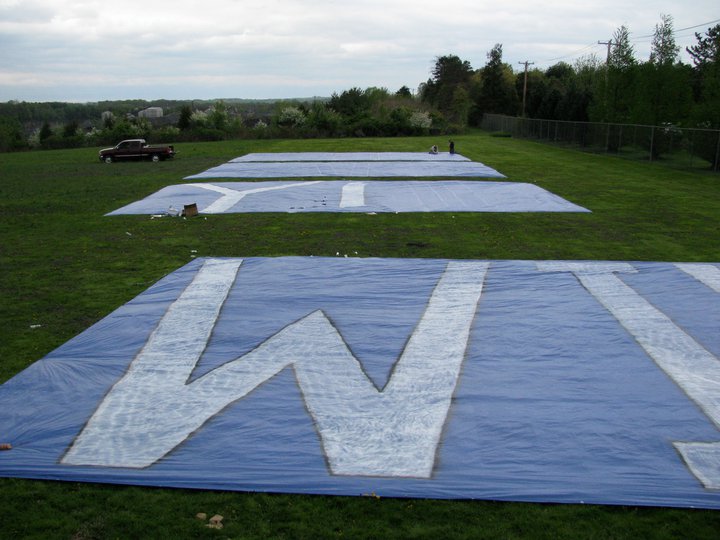 I still have the 10,000 square feet of blue tarp. And would love to sell them to another romantic chap.

2.) Captivation – The proposal should be tailored to fit who you are. It should show that he understands you and what captures your heart. If the mission of his life is pursuing you, then he had better be able to capture your heart.  In other words, he shouldn’t be popping the question at his local gun club unless you are Lara Croft and carry big weapons on your hips.  There are lots of different women out there. Some of you love tea parties, some love restaurants, almost all of you love gardens and sun sets, some love mountains.  Some of you love a Broadway show and city lights, while a few of you love to bow hunt, or climb shear granite at night with a head lamp on.  My fiancé loves to skydive. No really, that’s what she loves!  Most of you like romantic places such as secluded waterfalls, while others would prefer being at a Phillies game over having a few bugs in your hair after a hike. Either way, every single one of you deserves an intentional proposal that is tailored to fit who you are.  I recommend finding a man with at a least a little creativity in him. However, if he doesn’t have any then have the conversation with him about how you would love to be proposed to.  Tell him about the dreams being charmed by a prince that you have had since you were ten.  No girl wants to be proposed to in a hotel room or at the local bar.

Every woman longs to know that she is beautiful.  She is always asking the question, “Am I lovely?” Unfortunately, every woman has been told that they are not beautiful from their youth.  A man must pursue vulnerable places of the heart to rescue a woman’s identity.  A proposal should climax this battle and be the crescendo of answering her question.  She should know beyond a doubt that her beauty has taken his breath away.  A proposal must speak to this core question in the woman.  She must know that her beauty has inspired his courage, and that his arising strength will be powerful enough for her before she vulnerably opens herself and surrenders unto him.  Every woman is captivating and if you are being proposed to and you don’t feel like you are worth a fight for than you should say “no”.  If you feel beautiful beyond belief, and feel as though this man will pursue you for the rest of your life you should tell him how much of a man he is and say “yes”. 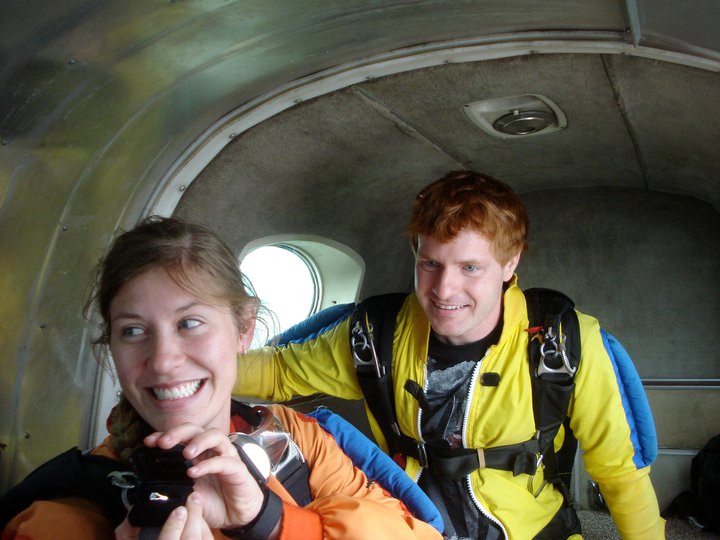 This is me shortly after I proposed to Ann. 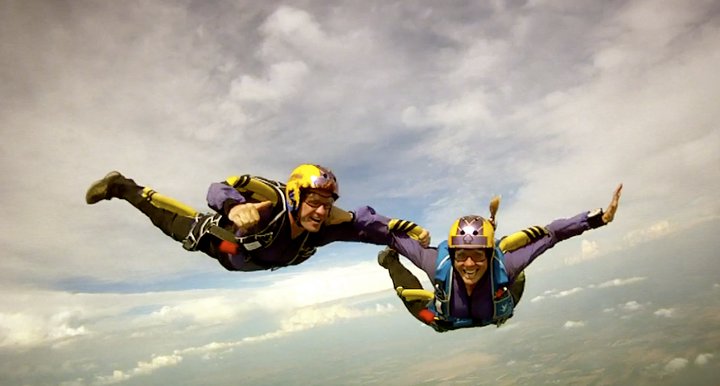 Ann loves to jump out of air planes and I love to do it with her.

3.) Sacrifice – It should hurt a lot. Not to you of course; it should hurt him.  The sacrifice should be obvious and remarkable to everyone. There is a growing movement away from proposing to a girl with a diamond ring.  This is unfortunate because way too many guys are getting off the hook.  Every woman deserves a diamond.  If the man can’t afford one then he will have to work hard and save his money.  It’s not about the diamond, its size, or its value.  It’s about the level of sacrifice, the investment.  In other words, if a guy asks you to marry him who makes $40,000 a year and drops 4K on a diamond then you should say “yes”.  However, if a guy makes a million in a year and gets down on his knee with the same diamond you should say “no”.  Women, don’t settle for less sacrifice than you are worth.  Again, IT’S NOT ABOUT THE SIZE OR VALUE OF THE RING.  I’m not saying you should get out your loupe and check if your diamond has inclusions or not.  You will know in your heart if your man has sacrificed in the totality of the proposal. A proposal needs to be an act of immense sacrifice.  You don’t want to submit to a man who is not going to sacrifice daily for you. The Bible says that just like Christ died for the Church so should your husband sacrifice for you.  Good proposals normally cost two to three months worth of income and the same amount of planning. 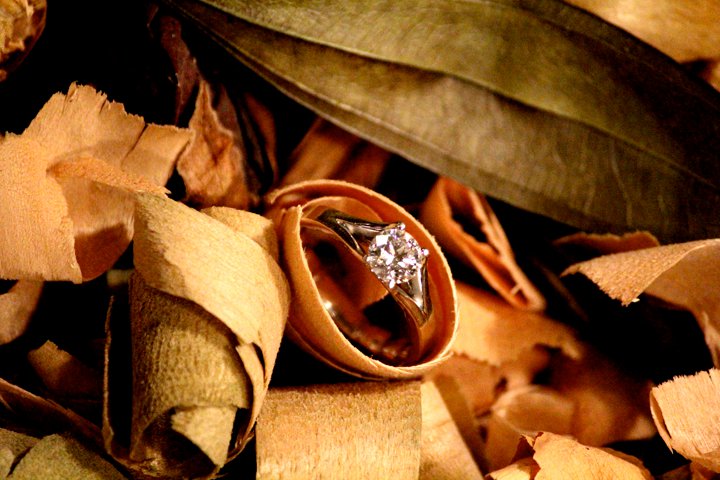 It doesn't matter the size as long as it's more than he can afford.

These three requirements – intentionality, captivation, and sacrifice – can be used to grade proposals that you hear.  I recommend grading proposals in your head so that you begin to have a feel for what you will need to say yes to.   The more thought that you put into this the less likely you will be saying yes to a wimpy man in a bar with a $150 K-Mart ring. If you feel like you don’t deserve such a level of sacrifice than say “yes”.  Anything less than that say “no”.

Women, God has amazing plans for your life.  And for most of you His plan will include being married for longer than you are single.  Walk closely with Jesus and let Him lead you to the man for you.  Don’t waste your time dating posers but rather enjoy your time walking with Jesus as a single woman and let Him provide you with everything that you need.  It is important that you find a guy who is in love with God and wants to serve Him with his life.  Look for a man who you can submit to who won’t be like a tyrant over you.  If your man has Christ at the center of his life, everything that I presented will come easy for him. 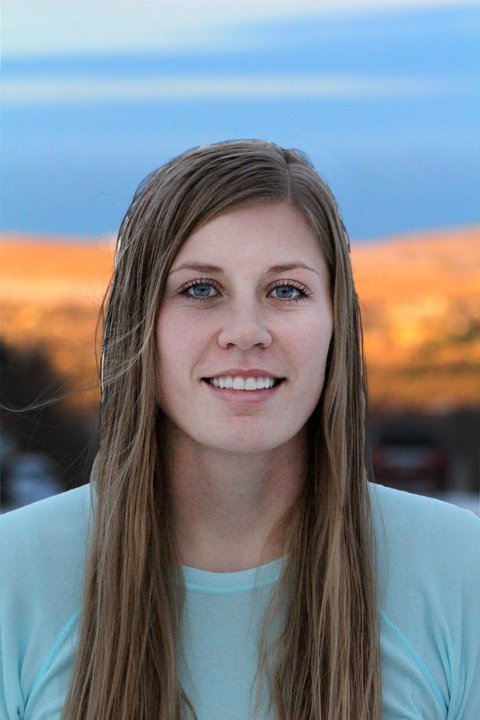 This is my Beautiful Mountain Woman Ann! 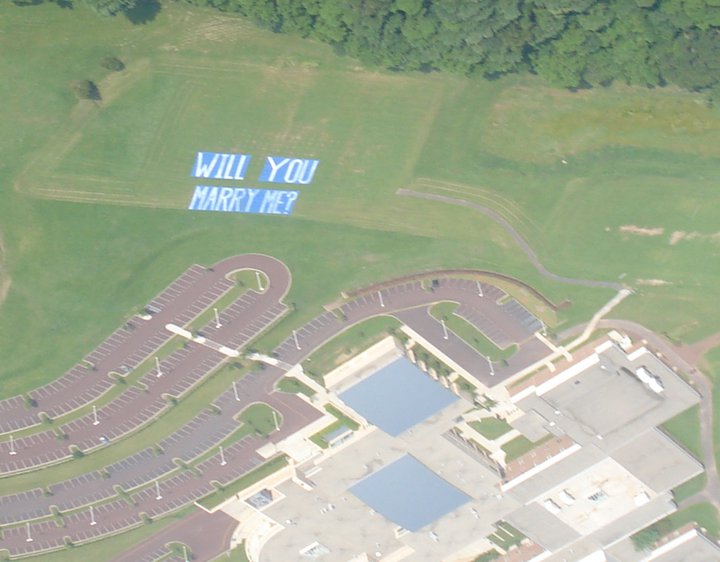 Here is what she saw from the air.

I would love to hear your stories of good or bad proposals, or your thoughts on all that I have said about proposing. All and all I hope that my actions and words have raised the bar a bit.