Katie is a distant friend of mine from high school, and after we ran into each other a couple summers ago in our hometown of Rapid City, SD, I invited her and her husband, Jeff, to write for our blog. These two have an awesome story to share about their love for each other and love for the Lord. This is the last entry of their three part series.  Enjoy the grand finale – the proposal!  -Ann

After a fun summer together full of fun and adventure, I had to go back to school. By the time I came home for Thanksgiving break, Jeff, along with his brother and some good friends had gone ring shopping and I knew nothing about it. I wanted it that way. Jeff and I had talked about this a little, but not in the way most couples talk about it. See, I figure that it’s the guy’s act of love, and he’s spending his money on it…if you love and trust him and he knows you better than anyone else does…why shouldn’t he pick out the perfect ring for you and why shouldn’t he decide when to propose?  So I wanted Jeff to pick out the ring with no hints from me and I wanted him to propose when he was ready.

Anyway…It took Jeff less than an hour to find the ring he wanted to give me. But I wouldn’t actually get to see it until Christmas break. On the drive to the Black Hills, I gave myself this pep talk that I wouldn’t be expecting a proposal every five minutes and then get disappointed when it doesn’t happen. And I guess it worked, because I wasn’t expecting anything. The day after I got home there was snow on the ground, and Jeff asked me to go hiking. Little did I know – he had a plan. We drove down to the Jenny Gulch area of the Black Hills, a beautiful little valley. I had never hiked much there, so I was excited. Jeff was laying it on thick, saying he didn’t know if the road would be too icy for us to get there. When actually, he had been there just a couple days before. Even the drive there was fun; we were listening to Christmas music and there was frost on all the trees. 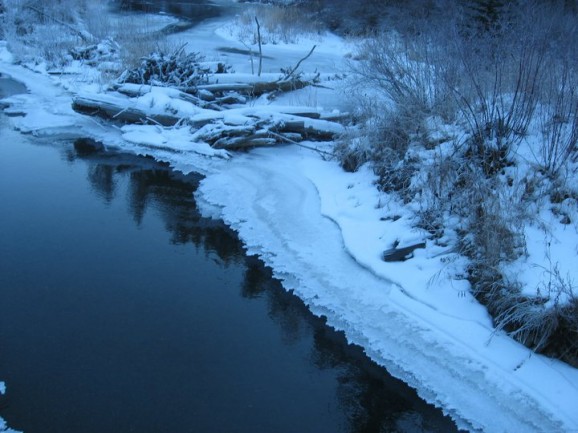 The hike was stunning. The frost had coated everything a sparkling white. At one point in the hike, we stopped to gaze at this frozen waterfall. Then Jeff excused himself and went into the bushes. I was starting to get cold and he seemed to be taking forever. That’s because he was getting the ring ready! So he comes back and says he wants to show me one cool spot and then we could go back. And since Jeff is always right when he says something is cool, I go along. We come to this bench overlooking another frozen waterfall, snuggled into this corner of a rock face. Then he pulls out this rock that he had chiseled with the words “Katie marry me?”. I guess when he had come up the week before he had spent hours chiseling this rock. Only some strong love could compel someone to do that in the freezing cold. I kept looking at the rock, then at Jeff, then at the rock again. It was like my mind wasn’t fulling functioning. The first coherent thought I remember having was, “If this is a joke, I’m going to kill him.” But it wasn’t a joke because he set down the rock and pulled out the ring he had bought a month before. He got down on one knee and asked me that oh-so-important question, “Katie, will you marry me?” There are so many thing wrapped up into that one question. I knew he was asking me, “Katie, will you let me be your warrior? Do you want to be my armor-bearer?” Finally, it clicked. I said “Yes!” loudly and enthusiastically as I tackled Jeff into the snow. I’m surprised we didn’t lose the ring. Jeff must have been ready for it and braced himself. After alot of crying and laughing and squealing and kissing, we prayed together, thanking God for bringing us together. Best hike of my life. 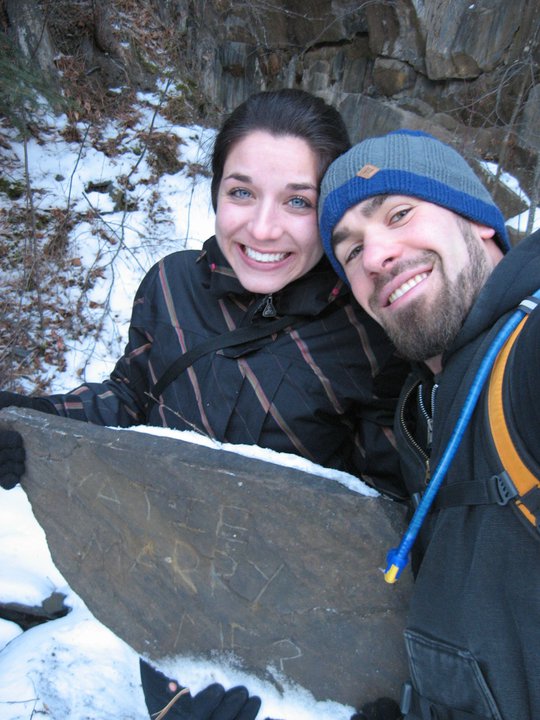