“The Journey is the Destination” 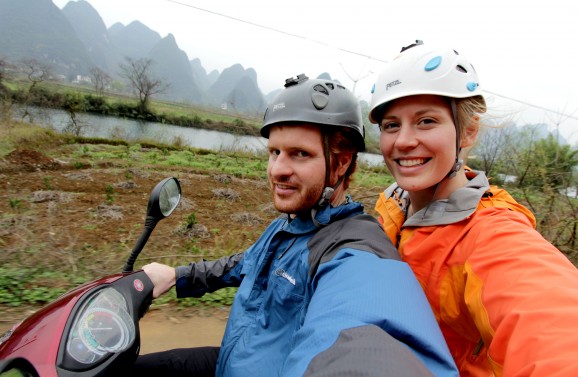 On Wednesday Joe and I had what was probably our favorite day in Yangshuo.  We had a restful morning – slept in, showered and got ready for the day, answered a few emails, ate lunch at a local restaurant, and headed to West Street.  A few days earlier we’d met two 18 year old guys from the UK who were traveling during their gap year, the year between high school and college (I wish this was mainstream in America!).  While chatting with these teenagers we learned that we could rent mopeds instead of bikes at one of the rental places in town.  They couldn’t stop talking about how beautiful the countryside looked and how fun it was to scooter around.  When Joe heard this he perked up, as riding a moped sounded far more comfortable than riding a bike (he’d hurt his back side in a climbing fall the week before).  So, for 100 RMB we snagged our scooter, stored our belongings, took one last look at the map and we were off.  Our destination was a fun little tourist spot called Shangri La, rich in history and beauty.  We arrived there just an hour before closing, but were able to see everything the park had to offer, including a really awesome boat ride through the Cave of Swallows.  It felt a little like being on Willy Wonka’s boat!

But the most memorable part wasn’t visiting Shangri La, it was actually the ride there that was unforgettable.  Just like the ancient Chinese Taoists say, “The journey is the destination.”  And we sure had quite the journey…or the destination? 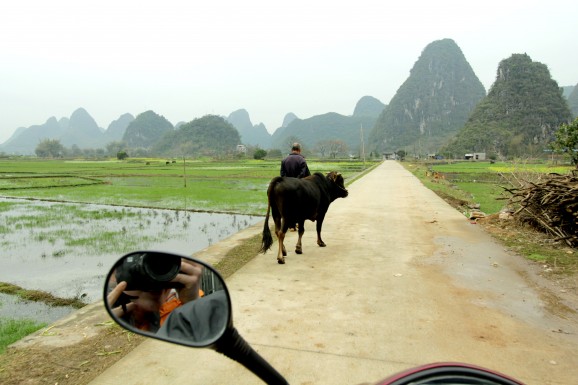 Our plan was to take a sort of backcountry trail along the Yulong River until we hit the main road. From there it was just a 15 minute ride to Shangri La.  It was hilarious watching Joe try to get used to driving the moped as we left West Street and started out.  He was swerving all over.  I decided not to ride on it initially so he could get the hang of it.  He took a few laps around the block and picked me up.  It took us a few tries before we found the trail we were after.  We passed many villages, always checking the map and asking the locals which way to go.  It was fun trying to interact with them through a game of gestures.  Now that I’ve spent three weeks in China, I’d take anyone on in a game of charades!   We soon found the trail we were looking for.  It was really a bicycling trail, but it was the only way through to the next village and we didn’t want to turn around and retrace our steps.  The countryside was absolutely stunning.  We followed the meandering Yulong River.  Beautiful karst mountains covered in lush vegetation climbed high into the clear blue sky.  A sea of bright yellow flowers scattered the riverside.  There were at least a dozen forks in the road that weren’t marked on the map.  One section of the trail crisscrossed through farm land, and we were soon on a foot wide dirt path.  It had been raining the day before, so the trail was completely muddy and full of water. Rocks stuck up everywhere.  We kept bottoming out, slipping and sliding, and eventually I had to hop off the back and walk to lighten the load through these tough sections.  The trail was clearly not made for a scooter.  I was almost sure we were lost, wondering if we would ever find Shangri La, but still very much enjoying such a wonderful day with my husband.  We eventually came to a beautiful stone bridge.  It looked like something out of a fairy tale.  The local farmers kept looking at us; I’m sure they were wondering how in the world we were going to get our moped to the next village. 😉 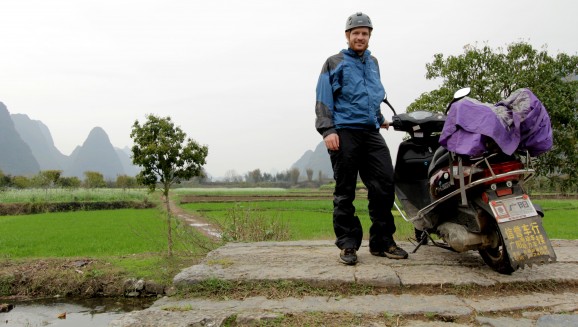 There was even a section of the ride where local farmers gave us handfuls of mini oranges as we asked for directions.  They were such a delightful snack and literally the best oranges I’d ever eaten. Super fresh right off the tree!  One of my favorite parts was passing through a small village that has pine trees, or something that resembled them.  I didn’t realize it before, but it was the first time I had seen anything like this in China.  It reminded me of the Black Hills as I looked out across the vast expanse.  There was no one in site for as long as I could see.  Only one small hut stood just in front of us about 100 feet away.  Joe and I laughed and smiled and just had a great time relaxing.  The couple weeks before had been somewhat of a roller coaster ride, and so it was nice to have such a peaceful day enjoying the beautiful scenery with each other.  I will never forget our little moped ride through the beautiful countryside of Yangshuo. 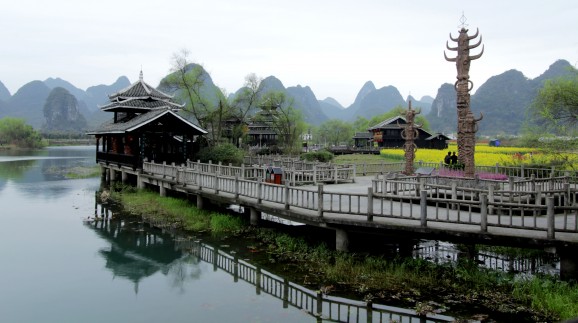