I’ve been married now for five months and I still don’t have a clue how my wife’s mind works.  She can go from loving me one minute to being emotionally empty the next, from exciting to be around to downright depressing.  It can sometimes be a roller coaster ride, and it always catches me completely off guard.  Sometimes it’s my fault for sure, but other times I don’t know.  I recently called a few of my married friends for support.  All of them, to my surprise, completely understood my confusion.  They all had similar stories to tell.

Well, why didn’t anyone warn me?  I wasn’t sure if it was PMS or spiritual warfare, but whatever it was it’s serious business.  I mean, did someone have a voodoo doll representing our marriage in a vice?  It felt like it.  Whatever was going on it was definitely not covered in the premarital counseling.

I still don’t have a clue how to overcome it.  And everyone gave me different advice.  None of it was clear.  Do I pray, fast, cast out the demons, stay and fight, or leave the house? Lately, I stick around and fight but that sure doesn’t help.  Sometimes I escalate it.  I try to fix things and it’s like pouring aviation gasoline on an open flame.

Ann says I need to just listen.  I suppose more listening could help.  Lately, I’ve been pretty impatient and unkind during her fits.  Sometimes I back away and find excuses to retreat back to my work, but then I feel like a wuss-bag poser off on my laptop exploiting the free wifi at McDonalds instead of fighting for my tangled up wife. This is so hard.

I admit living in Texas is not where either of us want to be, and this has created quite a bit of stress in itself.  I’ve been at my wits end trying to figure out what to do when my wife goes a little off the emotional deep end.  We had just finished a pretty big fight and both of us were feeling defeated when the Holy Spirit gave me the wildest idea, “Go paint balling!” I mentioned the idea to Ann yesterday while she was in one of her moods, and with an evil tone, she replied, “I would love to shoot you with a few paintballs.” 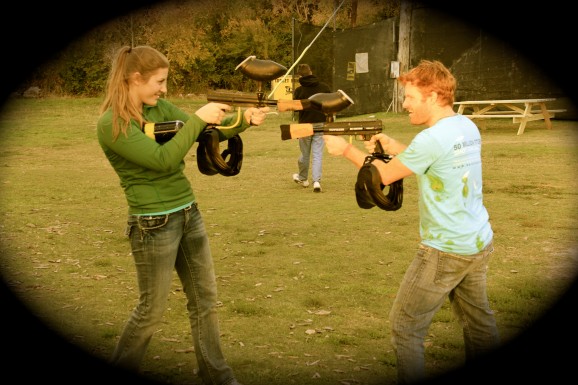 I googled a few different paintball fields, made a couple calls, and within an hour we were off.  The entire car ride we hardly talked.  We arrived, filled out the liability wavers, grabbed our paintball guns, and headed out onto the field with a handful of other walk-ons.  We were put on a field with six other guys, so it was four on four.  Ann picked it up quick and especially liked shooting at me when we were on opposing teams.  And it was fun to have someone watching your back when we were on the same team.  Either way, I was the one who was always getting “lit up.”  At the end of the day, my entire blue shirt was covered in yellow paint splotches.  Paint balling was the perfect way to get out Ann’s aggression. 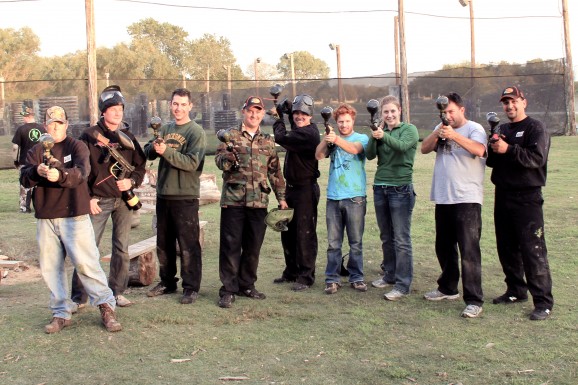 We came to learn that the six other guys that we were playing with were all a part of Jamie McMurry’s Nascar pit crew.  These guys are the mega-beasts that jump over the wall and fix, fuel, and change the tires on a car in under 10 seconds.  They were great sportsman. It was fun to hang out with such an awesome crew of guys. They said that they could get us into the center of a Nascar race if we had three weeks notice.  Well, we will just have to stay in touch with them.  I am sure that if we get a chance to see a Nascar crash from the center of the track the story will make our little blog.  So stay tuned. 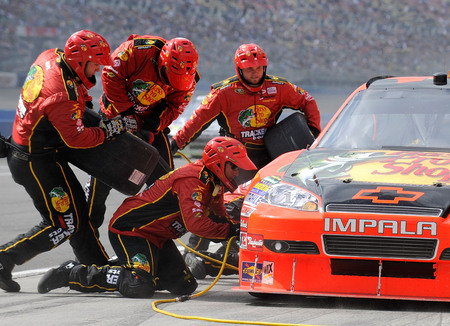 Paint balling was off the hook, we had some incredible skirmishes. And it did the trick.  Ann gave me some pretty big welts on my back, I made her knuckles bleed, and we both made some great new friends. On the way to dinner we were laughing and joking about the events of the day.  We went to a classy upscale Chinese restaurant even though we were covered in paint and muck head to toe.  This was the perfect environment to have a deep conversation about our relationship and to apologize to one another. The angry spirit lifted. We came home and had some great devotion time of reading the Word.  Then we prayed together specifically for our marriage.  I thanked God for delivering us and asked Him for more wisdom and strength if this spirit attacks again.  Then we finished the night by searching out new welts on each other while wrestling in the sack.

Did I mention how unbelievably amazing my wife is!?