One of Ann’s and my favorite dates is to go to the annual Banff Mountain Film Festival.  We literally have not missed one since we started dating.  The Banff Festival is packed with the latest outdoor adventure documentaries, which to us is like the Super Bowl.  It was after watching Karina Hollekim’s base jumping story in 2009 that Ann told me that she had always wanted to be a skydiver.  My heart was so kindled with passion that I spent the next year planning our mile high engagement.  Film has the power to move our hearts, awake our minds, and teach us something that we may not have learned any other way.  There have been lots of movies that have stirred my heart but the best have always been at film festivals.

Secretly, I have always wanted to make a short film that made the national cut.  My dream is that Ann and I would create a film that would merge our rock climbing, skydiving, mountain side with our desire to share Jesus with others.  I want to do something that really matters in eternity, and yet have the audience at the edge of their seats as though they are joining us on our own dangerous undertaking.  I’ve always just shrugged it off as an unrealistic idea…until last night, that is!

Last night I had a phenomenal opportunity that I did not want to miss!  I was personally invited to the E3 Film Festival at the Hope Center in Dallas, Texas.  It was a spectacular event.  They literally had a red carpet to walk in on, so I felt like I was going to the Grammys!  I got to meet a few super stars in the Christian film industry.  It was a tremendous honor to spend some time with the producers of Bella, the most monumental pro-life movie ever.  The films were not of the world’s top athletes summiting mountains like I was used to, but they were life changing.  They told the stories of hard-core missionaries taking on the world and spreading the good news.  I had never been to anything like this.  I was filled with a sense of amazement and desire.  It brought back the wonderful memories of my missions trips to China and Europe as a teenager.  I’m not saying I’m a completely different person now, but I have felt ready to board a plane since I left the theater.  Wow! My only regret was that Ann was not able to make it.  She was skydiving in Denver for the weekend for one of her best friend’s birthdays.  I know she would have loved it. 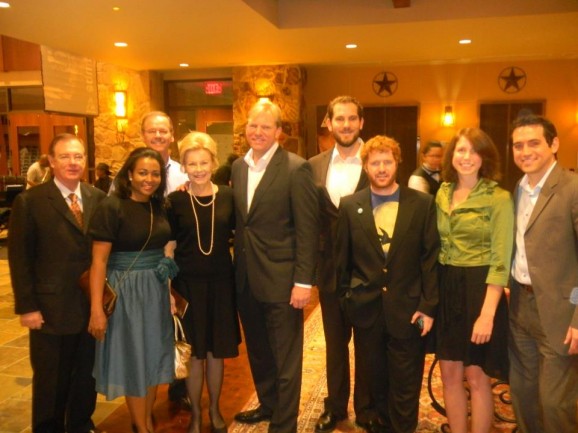 We talked today about going on a trip of our own – somewhere very far away and remote – a trip that wouldn’t be completely about us.  We want to go somewhere beautiful where few people go and meet folks who have not heard of Jesus.  We don’t know any details of where or when.  It’s all just a big dream right now.  We need to refine it.  What a better way to share our Wild Love Story than to produce a film for the E3 Festival next year.  E3 is an organization committed to taking the gospel to the entire world.  What an opportunity to be a part of it!

Please pray for us as we develop our vision.  We would love to hear any ideas that you may have for us.