I Was the One Getting the Coaching…

I got a call from Joe saying he would be in Longmont to skydive with Ann in a week. I was happy at the chance to see them again, and to jump with them of course. We had met and become good friends at the dropzone. I knew they were different from all the other skydivers there. Their positive energy and good spirits were only a few of the indicators of their obvious love for their Creator. It was refreshing to meet people who weren’t constantly either making crude jokes, talking about themselves or just plain negative. In general that’s not how most skydivers act but it only takes a few negative people to take you down with them. 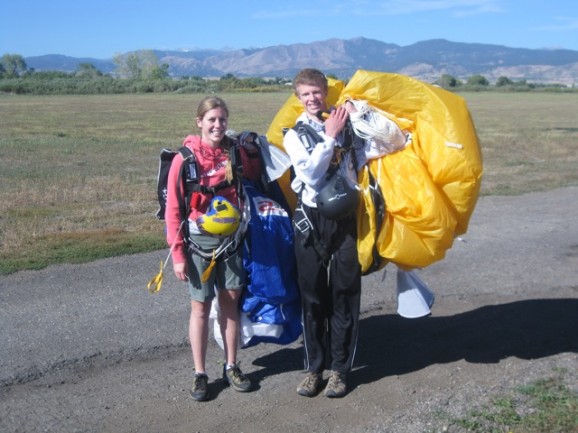 I was supposed to see the happy couple at their wedding a month earlier. But when the transmission fell out of my Jeep on the way up to South Dakota, I missed that beautiful experience. So, as you could imagine, when I saw them that afternoon I was ecstatic. They were practically, no, they are two of my greatest role models. The jumps that day were predictably squirrelly since the two hadn’t jumped in months, but that’s what made it fun.

As Ann, Joe and I set up our sleeping bags under the tail of the Beechcraft King Air that we had jumped out of earlier that day we started into a serious conversation. I can’t remember the contents of the conversation that followed because it was so late and long ago but it ran like this more or less…

Joe told me, “You need to invest while you’re young. Don’t just in silver or your education, but in your marriage. It will yield more than you know.” I nodded. Joe continued, “Being married to Ann is the best investment I’ve ever made. There are people that think we spend too much time and money traveling and adventuring. I honestly don’t know that much about marriage yet but I know a lot about investing, and that’s what we are doing. Most couples get married and then invest in a house. Whatever we didn’t invest in silver for our future, we are investing in our marriage; the house will have to come later.”

“I can’t argue with that,” I said. “But the problem is finding someone to invest my time in. There just isn’t anyone in my life right now that feels like I could spend the rest of my life with. It seems like all my friends or people I know met their spouses in college or even high school and I haven’t even had a girlfriend.” 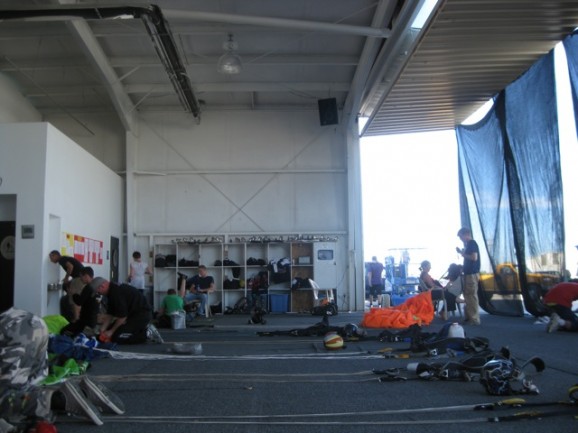 “Patience,” said Joe. “Do your homework, go slow, and don’t waste much time on bad investments. It’s worth the wait. Especially the love making,” he said wryly. I laughed at that. He and Ann had been quite frank about their entire relationship with me and left few things out. Ann had told me a few different times the best gift I could give my future wife would be my virginity. Ann had been letting Joe do most of the talking, only breaking in to chastise him for going to far, then suddenly she chipped in.

“You know, I was thinking something funny the other day. We need to set you up on a date with Halley!” I looked back at her and laughed again. I replied, “Its funny you should say that…” 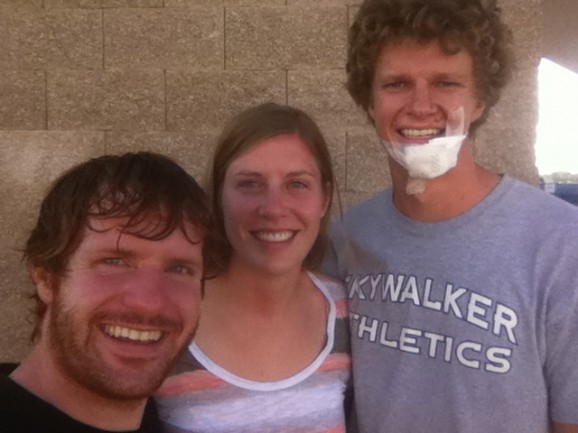 The patch on my chin is from a rough landing I had the day before Ann, Joe, and I all jumped together. I basically didn't flare at all and landed fully on my chin doing about 25 or 30 miles an hour. The guy I landed next to felt my impact on the ground and thought for sure I had broken something. Luckily, I didn't, and the only thing damaged was my not unsubstantial pride! Everything is all fine now though!