A day in the Cathedral Spires

the foursome, up West Gruesome;
started fearsome, turned into awesome!

chimney climbing, joe at the throttle;
jacket falling, “next is the bottle!”

as simul we were following, helmets a must;
the chimney tried swallowing, we gave grunts and a thrust.

the station we reached, regrouped and sorted gear;
dried mangoes were breached, as i prepared for wind shear.

mid-route we stopped, consulting paper directions;
the rock joe then topped, and yelled his beta inspections.

the leggy step-across, easier for the lanky;
RD and Ann showed who’s boss, “finally a move for me!”

the top was filled with smiles, a panoramic view;
we created media files, and a bond shared by few!

the four rappelled down, talking of routes for next time;
everyone safe and sound, high on our awesome climb.

hiked out of the Cathedral Spires, wild raspberries along the way;
leaving nothing to my desires, RD, Ann, and Joe really made my day!! 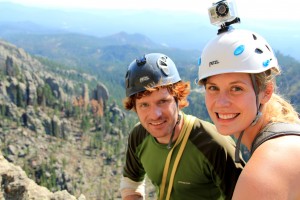 Jason, Rebekah, Joe and I spent an afternoon in the Cathedral Spires climbing West Gruesome. It was one of those picture perfect days in the Black Hills. We approached the canyon of spires from the south; the trail was grown over with two feet of grass and shrubs. Mountain flowers and wild raspberries were everywhere. Once we finally established where the route was, Joe tied in and set off. He quickly disappeared from site in a chimney above us. We often heard random grunts coming down from his direction, but for the most part we all had no idea what was taking so long. Then suddenly we heard something bouncing down. First his sunglasses case, then his rain jacket. We all immediately figured that his pack must have been open. “Heads up! My water bottle and camera might be coming next,” Joe yelled as he groaned up the last section of the chimney. Thank goodness nothing else fell out. Soon after he was finished climbing the chimney, he was pulling the rope at a steady pace until I heard him shout, “Off belay!” 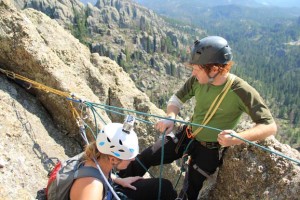 Quickly we were all moving. Rebekah blasted up first, and I followed with Jason twenty feet behind me on the same rope. We had to work together and move at the same speed, which was quite challenging in the chimney. I’m not usually a big fan of chimney climbing, but to my surprise I really enjoyed this particular chimney. It was a mix between trad and sport climbing and made for a fun, challenging first pitch. Jason probably would have preferred a more aesthetic route but somehow we both worked our way up into the sunlight. If felt so good to break out of the chimney and see the spires all around us. The spires looked so tall off in the distance, and I realized that we were on top of one of the tallest ones. 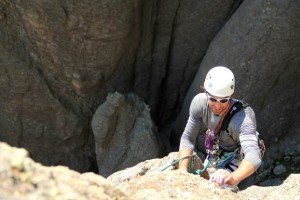 Pitch two was tricky but required a lot less physical strength than pitch one. Joe was pretty unprotected as he made his way up to the summit of the spire. After strategizing for a few minutes, Rebekah, Jason, and I were soon at the top with Joe. We took a few minutes to sign the summit log, pass around the snacks, snap some photos, and enjoy the beauty of the Black Hills. The view, framed by a cloud scattered azure sky, was spectacular. I took a few moments to let my mind absorb it.

Though the adventure ahead of us is sometimes difficult and scary, our horizon is panoramic. 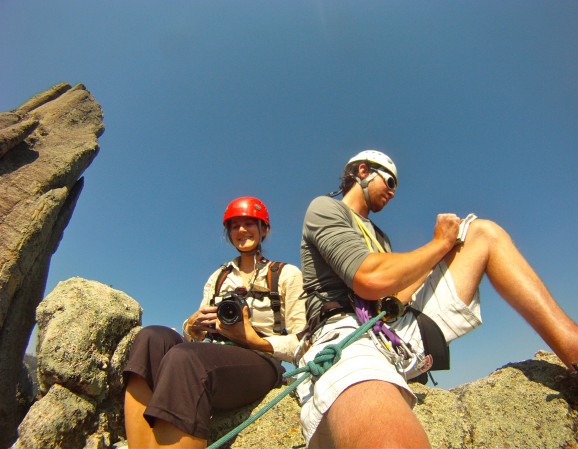 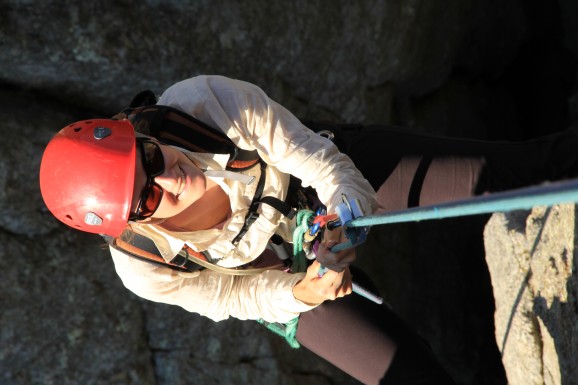 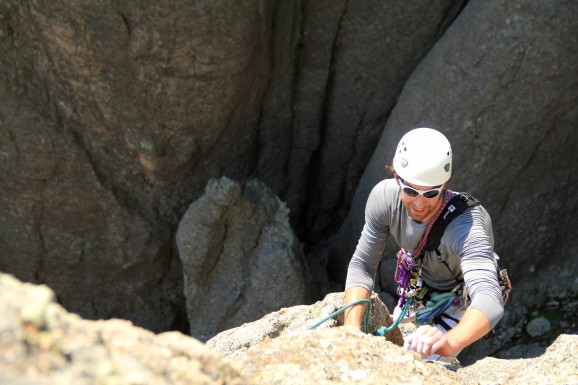 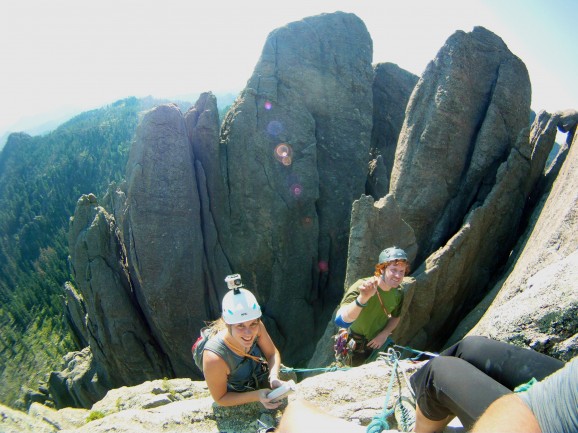 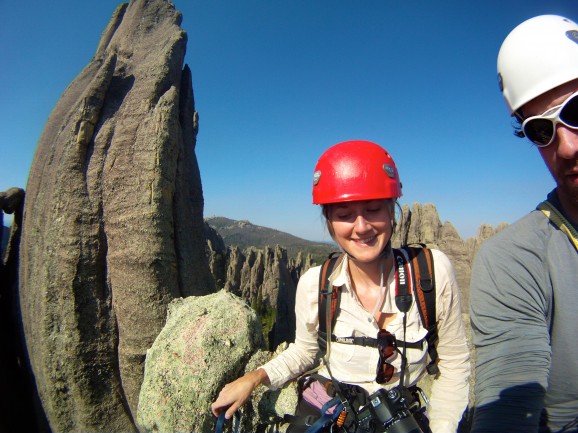 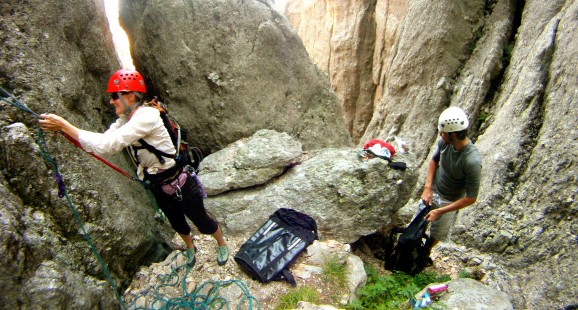