One of my mentors once told me a simple life principle that has really stuck with me. He said, “Joe, either you pay now or you pay later.” This is so true with finances. I mean, we all know somebody who bought a whole pile of doodads, an oversized house, or inflated college education on credit that they are now enslaved to, desperately trying to make the payments. All the while despising the very thing they had to have that got them in there predicament. Paying for things later seems like the American way but sure has it’s downfall. 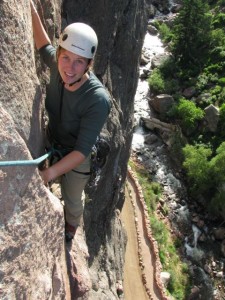 As Ann and I are planning out our wild love story we are considering this principal. Ann and I would be like pigs in the mud if we just piled all of our belongings in my van and traveled between climbing and skydiving areas for the next few years. We probably wouldn’t run out of money for five years and we would be living our dream. Seriously, we have deeply considered this. However, at the end of that we would have no money, no house, no kids, no larger mission, no fulfilling work, and no Biblical community. We would also have nothing during what could be the worst financial storm in US history. God could still call us to be vagabond climbing missionaries however if we don’t pay for it all now then we will have to pay for it all later.

Ann and I are doing everything that we to organize ourselves financially and are hunting for tips on ways to live cheaper. We invest every extra dollar that we have into our own businesses and into precious metals. Since 2008 both of us have valued our worth in silver instead of dollars because we know that silver is a superior form of global money to US dollars. So every extra sent is put in silver. We have been so compelled to move our wealth into silver that all of our purchases our bought on cheap low interest credit. We use credit cards that offer 0% APR so that we can keep the maximum amount of funds in metal. This allows us to invest the extra cash we make into silver and we live off of the monopoly money that we borrow. Since we always have plenty of silver to collateralize our growing debts it has no real risk or liability to accrue debt and silver this way. Instead of buying doodads with our credit we are essentially trading paper money for God’s money.

Even though we have plenty to live off of, we choose to live like we are broke. When it comes to making discretionary purchases 90% of them are on our adventures. Ann just took back an $8 apron that she purchased last week; she realized that she didn’t need it. Why have things that we don’t need? She thought the apron was cute but really is that worth not having a fourth of an ounce of silver when our real goal is wild love not things? (I promise that it was 100% her, she didn’t even tell me about the apron till she had taken it back.) We sell the things that we don’t use all the time. I’m always putting new adds on craigslist or Amazon. I went two years without an an SLR Camera because I sold it to buy silver at $10 an ounce. In december I finally bought a new camera and silver was at $40 an ounce. We have been trying to make the decision to buy I Phones or not for the last three months. We are wondering if it is a wise decision that will benefit our story or not. The only bad compulsive financial decision that I made this last year was to invest in Chocolate as an ETF right before it tanked. I can’t think of any material thing that I regret buying this year because I didn’t buy anything that I didn’t need. However when it’s time for us to buy $6,000 sky dive rigs it will be just a few ounces of silver that we have carefully put aside. Wild love story’s aren’t cheap and unless you are wealthy you are going to have to choose between luxury or adventure.

Both of us are convinced that financially hard times are coming to America therefore we are making decisions about where we want to live, what businesses should we build and how we want to live based on our vision of the future. Just like Joseph in the Bible, we are storing up as much as we can and positioning our selves accordingly while there is plenty so that we can make it through the coming famine. You don’t have to have to be a psychic to know that the US dollar is going to collapse soon. I hope that I don’t sound as absurd and as far out as Harold Camping when I state that the next twenty years are not going to be like the last twenty years. We are not scared about the future; instead we are exhilarated as we prepare.

Our plan is simple we are proverbially and financially paying now so that we can sustain the love story that our hearts long for later.