On Christmas Day 2009, Joe handed me a very large box to open, and just like every other gift Joe had given me, I had no idea what to expect. The package felt very light, so I was intrigued and quickly opened my present. Underneath green and red tissue paper was a single sheet of paper with a hand drawn picture of me with a parachute. Joe had arranged for me to take the Advanced Free Fall course to learn to skydive! This was by far the best present I had ever received. 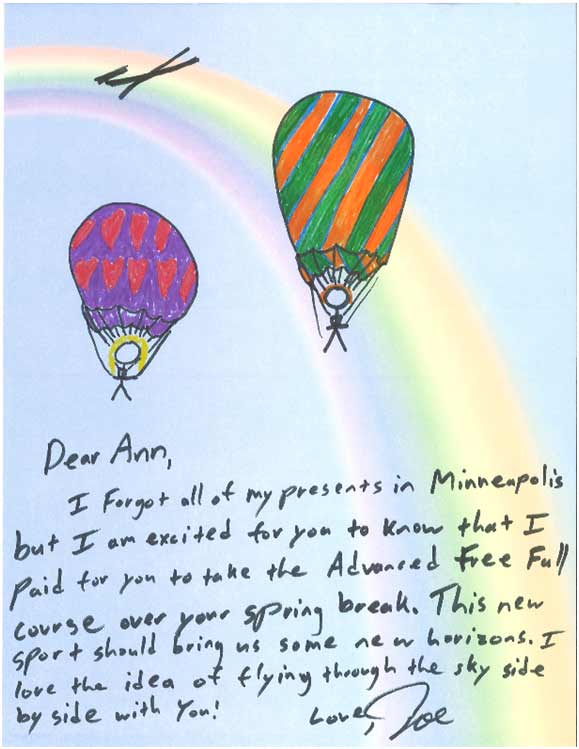 All winter I was anxiously awaiting and dreaming of the day when I would finally get to be a licensed skydiver. School ended the beginning of May, and shortly after I was on a plane to Joe’s to start my training and help him prepare for another summer of touring music festivals. I took my first few plunges during the middle of May, and by the end of the month Joe and I had passed the seven levels of the AFF course. 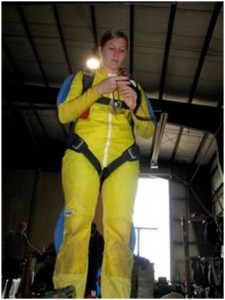 The morning of May 29, 2010 was really just like any other morning. However, Joe had been planning it for almost a year. I woke up, had breakfast, and met Joe at the airport. Little did I know that Joe and his Band of Brothers had been up since 4am laying out 10,000 square feet of blue tarp on the high school’s soccer field. Now that I look back on it, there were a few small changes to our pre-skydiving routine at the airport that should have alerted me that something was up, but I had no idea. And I’m glad I didn’t!

Joe and I hopped in the plane with our instructors and friends. The weather that morning was slightly overcast, but we were still in the clear to jump. At about 3,000 feet in the air, my instructor Aaron told me to stick my head out the plane door to “check the spot.” 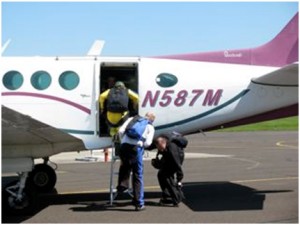 In skydiving, checking the spot basically just means that you are doing a visual check to make sure that the airplane is flying directly over the runway so a correct landing is optimized. Joe and I had been practicing this and so I knew exactly what to do. I did find it somewhat interesting, though, that I was checking the spot at a much lower altitude than I normally did. My head went out the door and there it was – a huge mass of four blue tarps with the words “Will you marry me?” on them.

The site took my breath away. I had no idea today was the day I would be proposed to, and so I thought to myself, “Is this for me?” I immediately turned around to find Joe already on his knee (we were both kneeling actually because of the size of the plane). 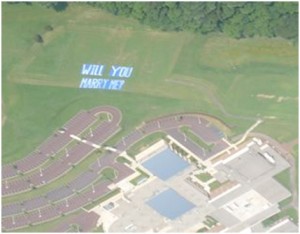 He asked me the question every woman excitedly waits to hear: “Will you marry me, Ann?” I responded with a happy, but nervous “Yes!” I couldn’t believe this was actually happening! He pulled out a huge diamond ring, slid it on my finger, and I turned around to show all of our skydiving friends. Meanwhile, a few of them had gotten the whole thing on video with the cameras on their helmets. They all knew it was coming.

The cloud coverage was actually too low for Joe and I to jump. Up to this point, we weren’t licensed skydivers and so we could not jump out at such a low altitude. The other jumpers exited the plane, and Joe and I enjoyed a beautiful 15 minute plane ride all to ourselves! Joe and I were able to share our happiness together as a newly engaged couple. We lay on the floor of the plane, stuck our heads out the door and kissed. Joe told me a few of the reasons why he wanted to marry me as the pilot flew us back over the tarps so I could see his work of art a little closer. 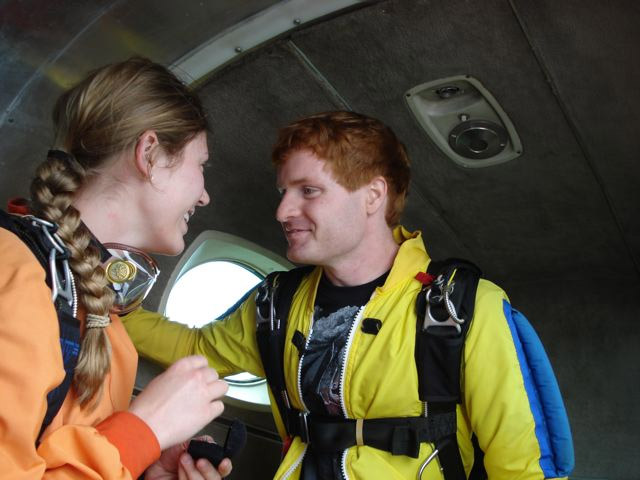 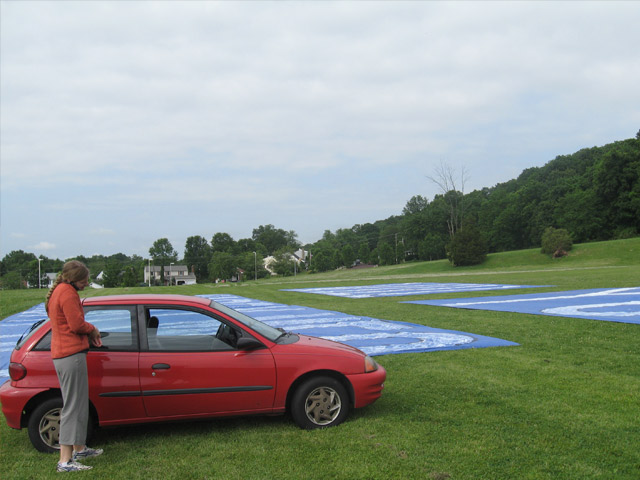