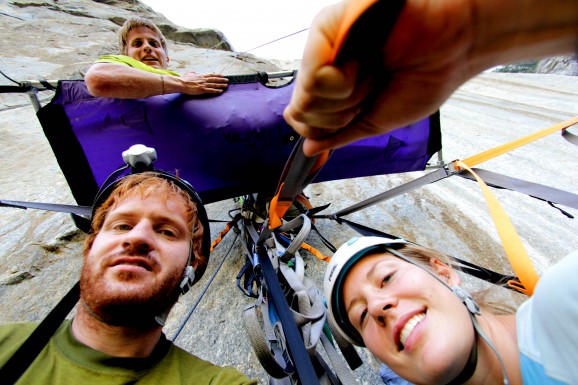 I let out a loud grunt as I pulled on the jumars with all my weight.  The haul bags hardly moved.  The hardest part about wall climbing is hauling all your gear up, and even though I had set up a mechanical advantage (three feet of pulling equals one foot of lifting), it was still tough.  Since we were planning to do the route in three days we were carrying about 200 pounds of gear; most of the weight was composed of water…83 pounds of it!  Running out of water on a wall is an extremely dangerous scenario and we weren’t going to be caught without enough of it.  A few days before, Bryan and I were ready to drink pond water because we were so dehydrated on the Royal Arches Traverse. 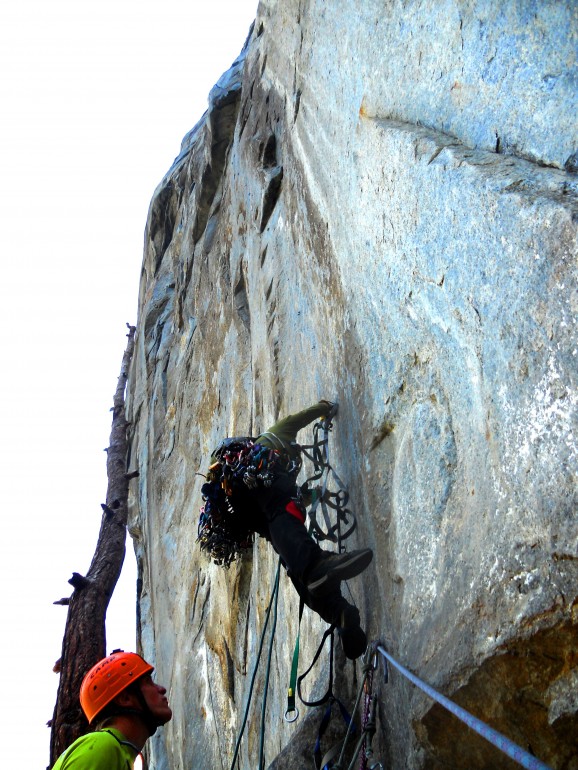 The last pitch had really challenged me.  I spent almost an hour in my harness trying to figure out how to aid over a large roof, and then another two hours working my way up a 200 foot section.  This left me with the nagging feeling that I was in over my head and my back was in pain from hanging in my harness so long.  Our first camp was supposed to be 200 feet above me and I didn’t think we were going to make it.  Then, when Bryan started flailing on his ascenders trying to clean the last, overhanging pitch, I knew for sure.  Right then I gave up hope of getting to the summit.  Even though we were only one day into the adventure, I knew that it would not be safe to go any further. I thought about pushing Bryan a little more, but I knew this would not be enjoyable for Ann.  She had already had her own share of misery.  So I made the executive decision to start back down.  I’m learning the principle that it’s harder to push your own limits when you are responsible for others. 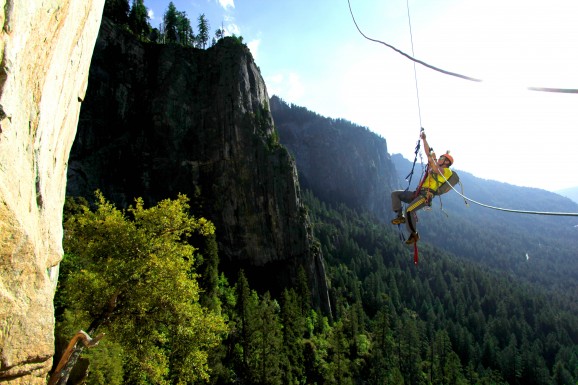 Instead of having our camp at 800 feet, we decided to descend and set it all up at the last pitch just 400 feet off the ground.  We could have continued down and reached the car with headlamps, but camping sounded like more fun since we had already exerted a tremendous amount of energy hauling the gear up.  This was my and Ann’s first overnight big wall experience.  Setting up a port-a-ledge while hanging from anchors is tricky, at best.  It’s nothing like setting up a tent.  Though the ledge moves quite a bit under the shifting of your weight, it is remarkably sturdy, and we always remain clipped into the anchors (of course).  Once we got camp all set up, we cooked some noodles and told some stories.  Bryan had the smaller port-a-ledge above us and would lean over to talk. 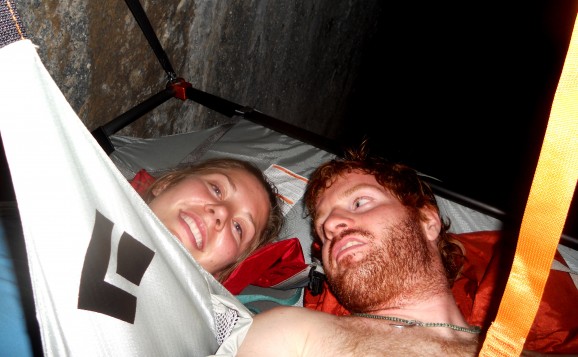 Just breathing the open air was soothing to my many sore muscles.  Ann asked to be on the side closest to the wall, so I had the best view.  My favorite part was just looking at the stars.  I loved how they created a silhouette behind the mountains.  After a quick prayer thanking God for the day we all fell asleep.

I awoke up to Bryan’s startling call, “There is someone coming up the route!”

The sun hadn’t risen yet but I could hear gear clanging in the distance.  I leaned over the ledge and saw a solo climber coming up.  When he was within earshot of us, he made his feelings known.

“You guys are clogging up one of the most popular routes in the Valley.  I’m going to have to climb over you,” he said in a frustrated tone (he was the first person that we saw on the entire wall in three days).

He set his anchor just below us, and the next thing I knew he was sitting on our ledge since it was in the way.  I didn’t even have time to put my shirt on; a little awkward, to say the least.  This was one of the toughest dudes we had ever met.  He was part of the Yosemite search and rescue team and an Antarctica search and rescue team.  As we chatted he became a little more amicable.  His plan was to climb the route solo in a single day (meg-a-beast).  Solo aiding means that he fixes his rope at the anchor and then belays himself with a GriGri on a chest harness.  Once he is done with the pitch he must rappel down, clean his gear, and then jumar back up to start the next section.  I can’t even begin to comprehend doing that all day.

Most climbers, including the three of us, feel immensely inferior to the YOSAR climbers; they get to live in Yosemite Camp 4 indefinitely while the rest of us peons have to wait in line for hours just to get a shot at having a place to camp in the valley, and never for more than a single week at a time.  It was a major shot to our self-esteem to let him know that we were bailing on the route after only our first day.

After a little chat he continued up the route.  I was surprised to see him struggling on the same roof moves that I did.  I had the perfect view, lying on my back directly below him.  He struggled with it for about 15 minutes before he busted a piece and came flying off the wall.  He whipped down about 12 feet, dusted himself off and immediately hopped back on and started going up the roof a new way. My ego went up a notch knowing that even though I struggled, I had already gotten over the roof. We had left our ropes fixed to the next pitch so this was obvious to him.  While he was giving it a second try, Ann decided to get up and take her morning pee.  It turns out that it’s quite an ordeal on a port-a-ledge.  Thankfully Bryan’s ledge was above ours giving Ann some cover.  The plan was for her to pee in an empty Nalgene bottle, and then it was my job to dump it while she shimmied around getting her pants and harness all back together.

My job seemed easy, but I forgot to look before I emptied it.  Instead, I looked right after I dumped the entire contents of the bottle overboard.  Horrified, I watched every last drop of warm urine drench the solo climbers’ rope stacked below us on a ledge.  I immediately turned my head to see if he noticed; he was still working on the roof and didn’t see any of it.  Bryan sure noticed, though.

“Did you just dump that on his rope?  He is going to kill us!  Quick, let’s pack up camp before he notices,” he said leaning over his port-a-ledge.

This, of course, would be an impossible task considering it took hours to set up camp and we still needed to rappel 400 feet with hundreds of pounds of gear.  I laugh now at even the thought.  I looked over at Ann who was as red as a beet.

“Why didn’t you look you before you dumped it!?” she said as she pulled her sleeping bag over her head.

I pleaded forgiveness on the grounds that it was an accident, but it was actually pretty ridiculous. We were whispering to each other, trying to figure out what to do, when all of a sudden we heard “whoosh!” followed by the sound of metal scraping against rock as the YOSAR climber again busted a hook on the roof and took an 18-foot whipper upside down, swinging onto his back.

“I’m going to have to go back to camp to get my hammer.  There must be some fixed gear missing from the roof,” he replied.

He took the fall like a champ, but as he lowered himself down to the ledge below us his pride appeared to be a bit shot. To make matters worse, as he was coiling his rope he kept sniffing his hands.  There was no doubt that he knew, but he didn’t say anything.  I thought about saying something but what could I possibly say? “Um, sorry for dumping my wife’s piss on your rope.”  Heck no!  I tried to ignore it and initiated some small talk about the route.  33% of me felt really bad, 33% of me was scared for my life, but the other third thought it was one of the funniest things ever.

I guess the Wild Love Story mental note for this week is: whenever I dump my wife’s pee off of a port-a-ledge, I’ll make sure to look. 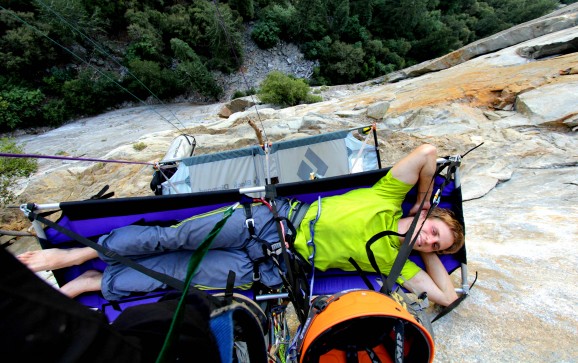 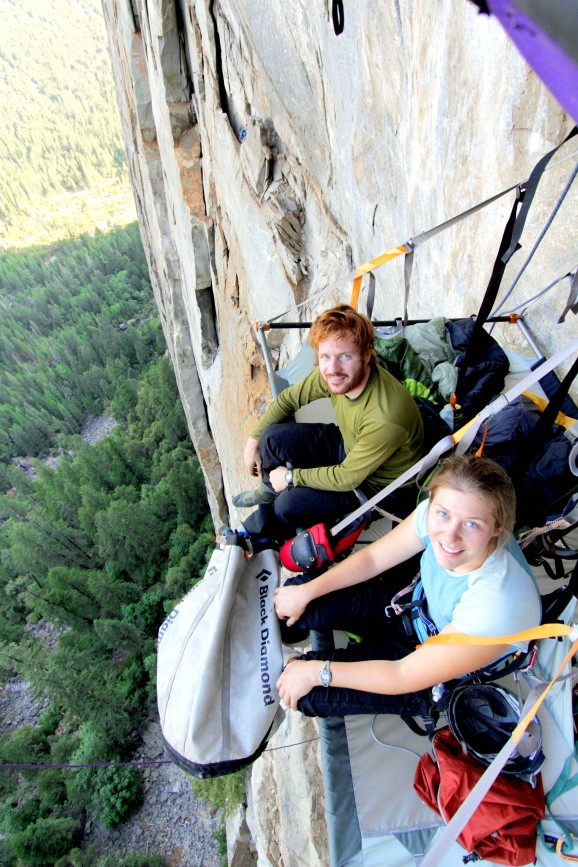 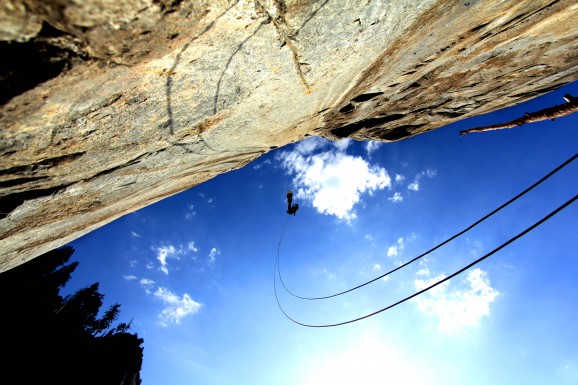