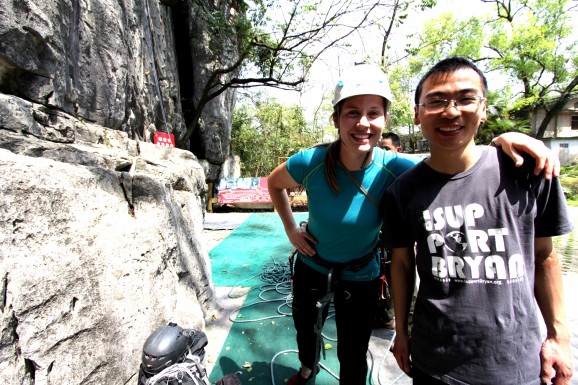 I remember the day we met Richard for the first time.  Joe and I were having lunch with our Chinese friends, Stephanie and Jack, at a tiny little dumpling restaurant in Guilin.  As soon as Richard arrived and started talking, we were quite impressed with how well he spoke English.  We all had a wonderful lunch and conversation together that afternoon, and we continued to spend more and more time with Richard as the days went on.  Our friendship grew so much and so quickly that Joe and I were soon inviting him to come rock climbing with us on the weekends in Yangshuo.  By the end of our trip, we had spent almost every weekend hanging out with him.

Joe and Richard became especially close friends because of their similar interests in politics, business, and world affairs.  I was impressed with how much American history Richard knew…more than me even!  Joe and Richard both had a lot of questions for each other about American and Chinese culture and government, and they really enjoyed learning from one another.  Richard told us a couple different times that it was his dream to come to America, but he wasn’t quite sure how to make it happen.  As soon as we got back to America we started missing Richard and so Joe and I started talking about helping him out with his dream.

We have decided to be his sponsor back to America for the summer.  We just sent over all the necessary paper work and are praying that his interview for his US visa goes okay!  It turns out that it’s pretty hard to get into America.  We believe in Richard and think that this trip will grow him in many different ways.  We are so excited to see him again.  Please keep Richard in your prayers, as he has his visa interview next week.  I hope all of you get to meet him when he comes. 🙂