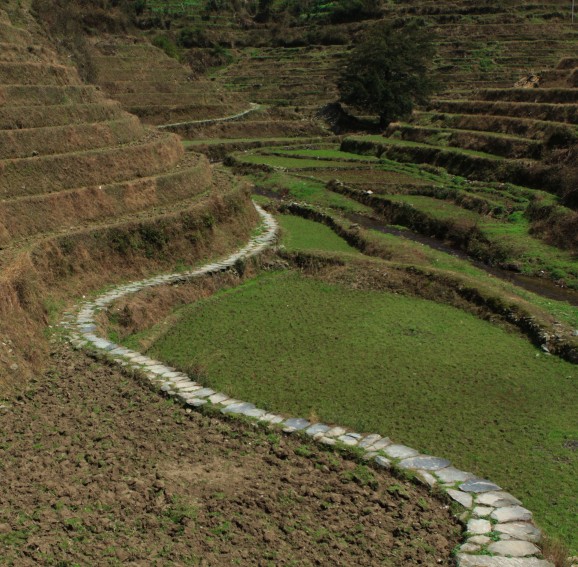 When we arrived in Guilin at the beginning of March our Chinese friend Stephanie, who works as an English tour guide, emphatically told Joe and I to visit the Longji rice terraces near Longsheng.  She promised we wouldn’t regret it.  From what I’d seen of the place in pictures her suggestions were definitely justified, but it looked a little too “tourist-y” for Joe and I so we didn’t give it much thought. In Yangshuo, more and more people suggested we make the trip to the terraces. We had a blast exploring Yangshuo, but with daily rain and wet rock, we were ready for some sunshine and a change of scenery, so we decided to make the four hour trip by bus to the rice terraces to wrap up our time in China. 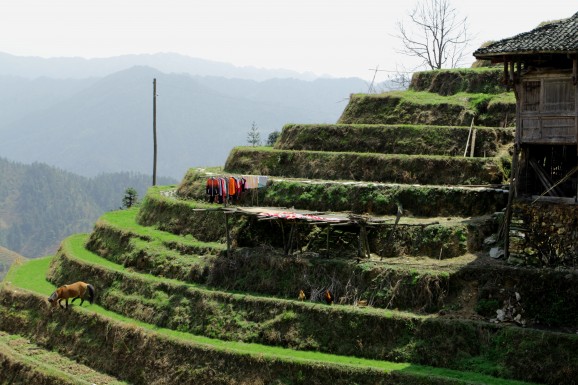 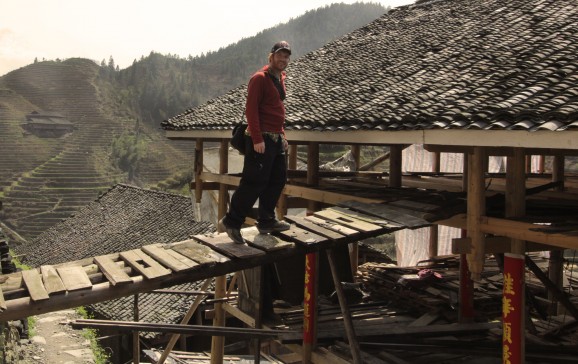 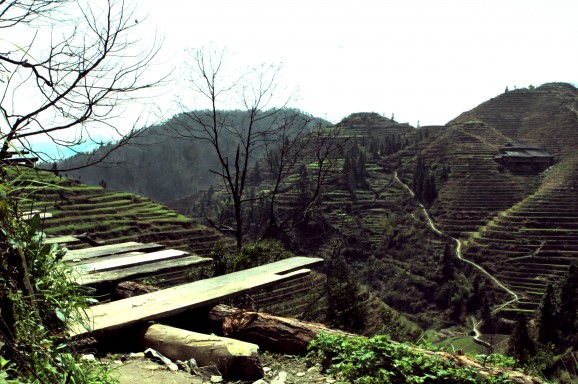 We weren’t sure what to expect for accommodations when we got there, or even how long we were planning to stay, but the first thing on our to do list was to find a hotel room.  While I finished lunch, Joe took a quick hike around the small village of Ping’an to see what was available.  From the outside all of the buildings looked pretty shanti, but much to my surprise Joe found us the most amazing hotel room right on the edge of the terraces.  The view was absolutely breathtaking, and I almost felt a little dizzy as I walked in the room and looked out the windows.  I had never seen anything like it before!  We were on the top floor of this quaint little hotel in the mountains, overlooking the rice terraces in the village.  I felt like I was staring at the pages of a National Geographic magazine as I looked out the window. 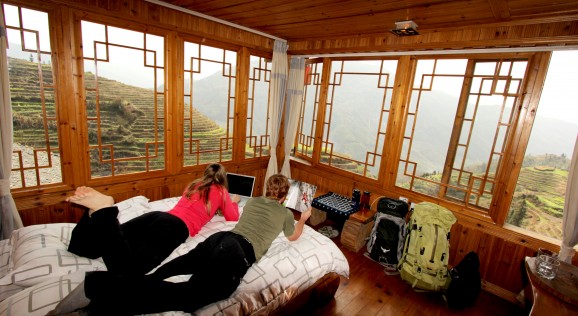 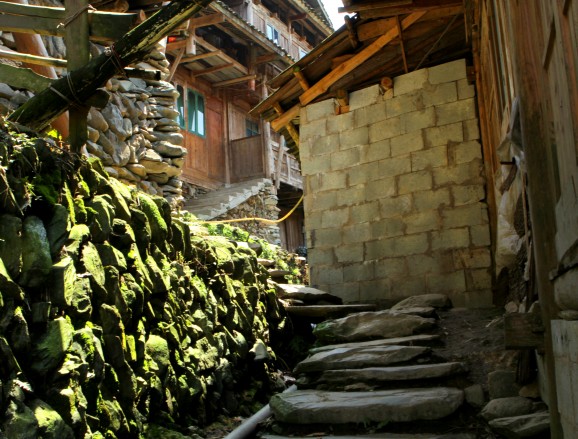 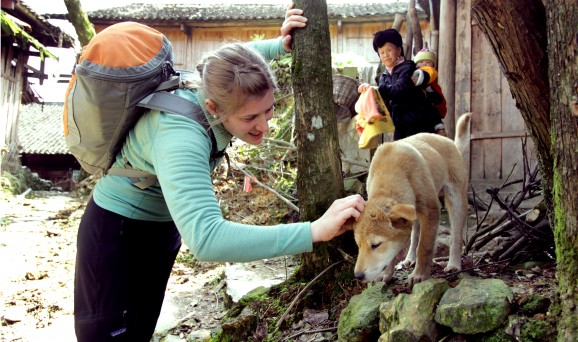 The next morning we were up early, ready to set out on a five hour hike to the village of Dhazhai.  The viewpoint from Nine Dragons and Five Tigers was our first stop, and as I stared at the magnificence of the terraces, I couldn’t help but wonder how much hard work and man power went into the building and design of the terraces and irrigation system.  It all seemed so complex and yet so simple at the same time.  The terraces were over 500 years old and still fully functional.  I glanced at my watch and realized that we needed to keep going.  Joe and I were having a great time hiking together, talking and enjoying the warm weather and sun, when we rounded a corner and saw a Yao minority woman walking toward us in the distance.  When we caught up to her, she tried to make conversation with us as best she could.  She pointed to a faint trail up the grassy slopes behind us that led to a hidden lookout.  We scrambled up to the top to see another beautiful view of the terraces, and Joe excitedly started taking pictures.  The Yao woman signaled me to sit down, and from under her clothing she pulled out a bag of thread and an embroidery cloth and eagerly began teaching me.  I tried to figure out her name through very broken Chinese and gestures, but either she wasn’t quite understanding me or I wasn’t understanding her, most likely a little of both 🙂  Either way, I never did get her name, but I will always remember her as Yao, because she belonged to the Yao minority group.  The Yao women cut their hair only once in life when they turn 18.  From then on they grow their hair out and never cut it again.  They keep it wrapped up in a large bun on the top of their heads and secure it with a head wrap. 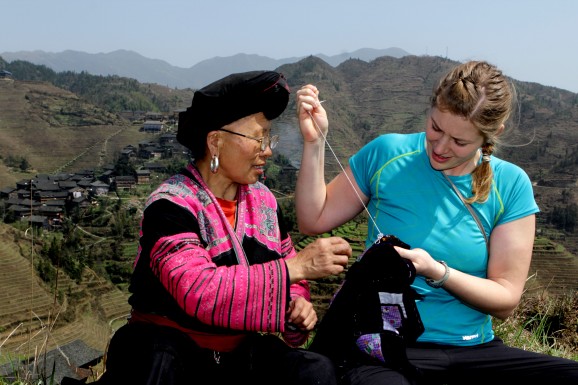 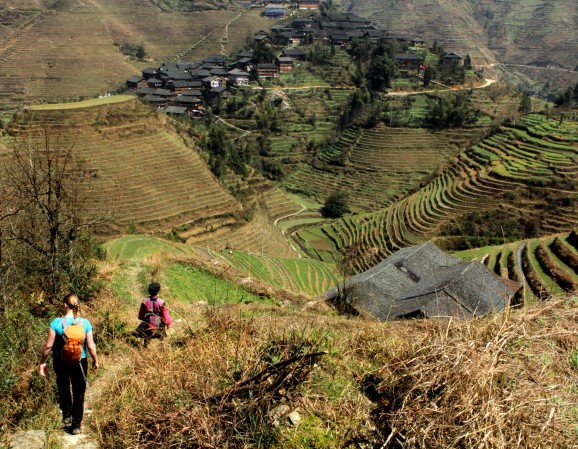 She continued to hike with us, even though we were now going in the opposite direction she was originally headed.  Just as Joe and I were starting to get hungry, Yao invited us to her home for lunch. As soon as we said yes, she jumped ahead of us on the trail and began leading the way.  This woman was 50 years old and in way better shape than me!  Not only did she out-hike me, but she was even more brave.  I couldn’t believe some of the crazy terrain that she blazed through!  We took a break at a little stream and cooled off.  I could feel myself getting a little sunburned.  I heard rushing water and I immediately knew there was a waterfall below us. 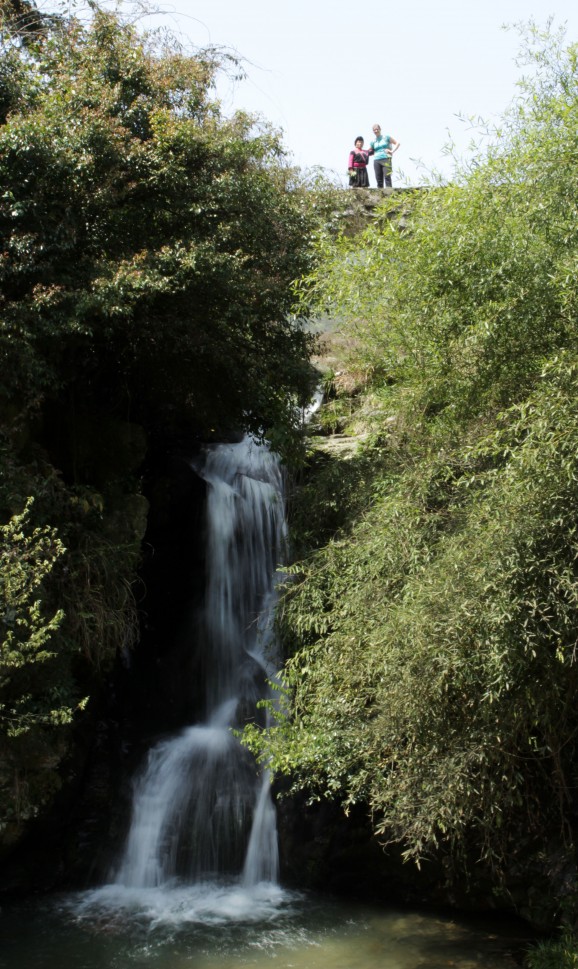 Standing three stories high, Yao’s home looked massive from the outside.  When she opened the door and brought us in, I was surprised to see that there was hardly anything in any of the rooms. The only furniture I saw was a bed, a small table, and a couple of tiny chairs.  From the ceiling hung an assortment of interesting meats; I was relieved that none of it stunk!  Yao lit a fire on the ground and started cooking in her wok.  She first made potatoes, then bamboo shoots, fried vegetables, and rice. I helped her peel vegetables and watch over the wok while she prepared the food.  (Believe me, she’d put any Boy Scout to shame.  She practically made lunch from scratch!)  Just as we finished our meal, Yao disappeared into the adjacent room and came out with traditional Yao minority clothing. She quickly dressed me, and we had a great time giggling and laughing at how much bigger and taller I was I was than her.  I could tell she was pleased when she put the finishing touches on my outfit. We took a few group photos to remember our time with Yao.  She was so happy that we stayed for lunch, and we were so blessed to have met such an amazing woman who introduced us to ancient Chinese culture. 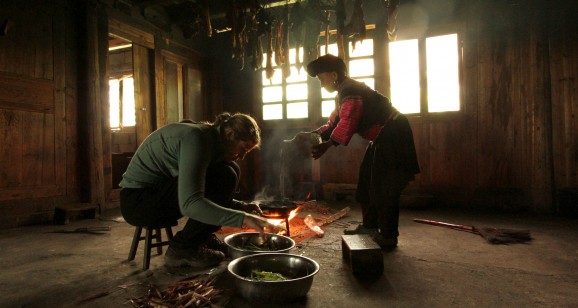 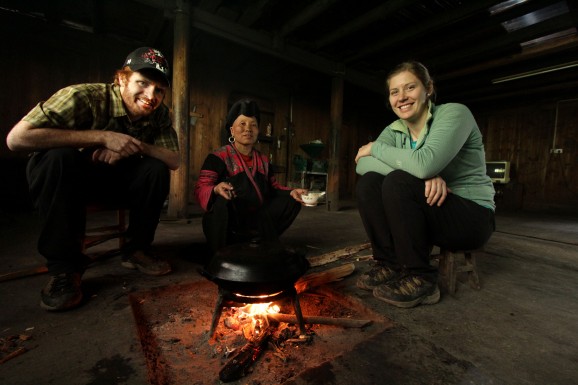 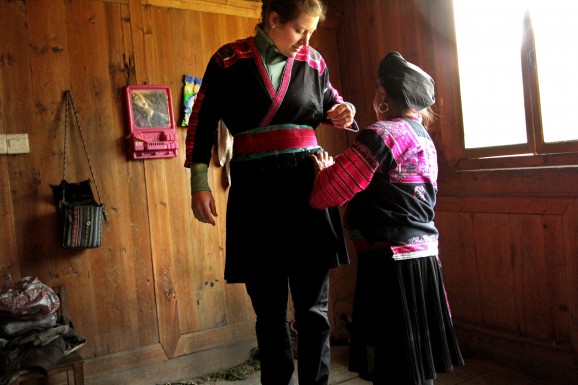 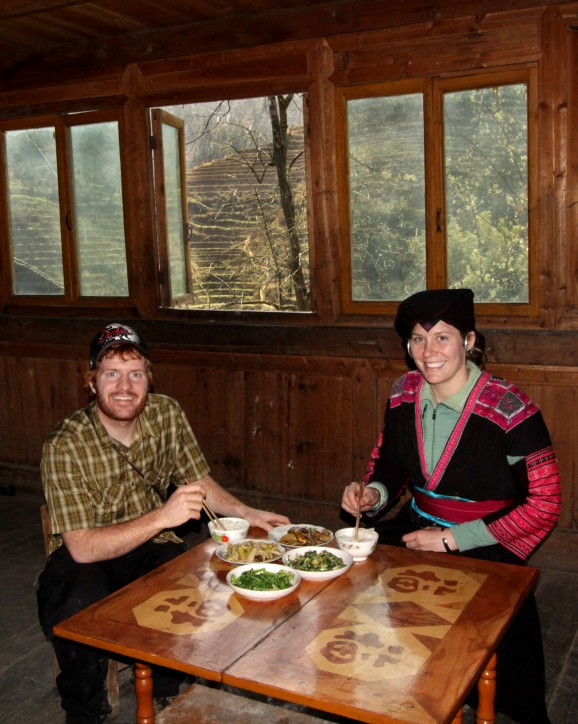 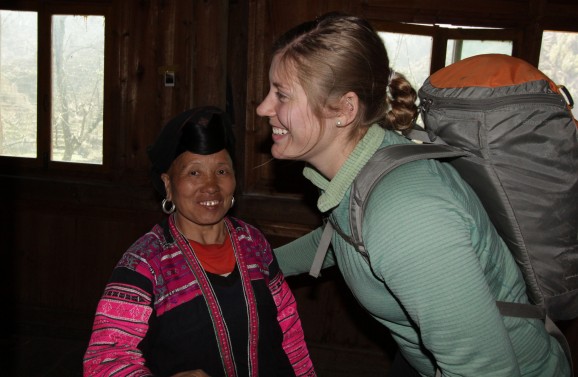 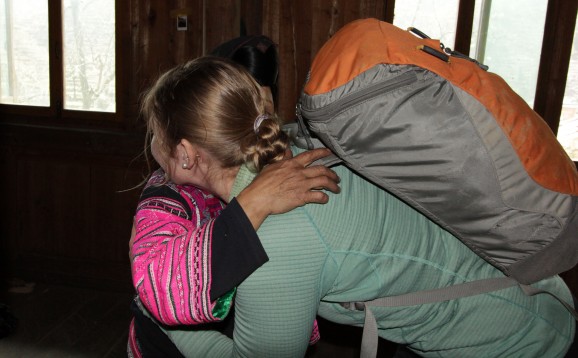