And One More Before You Go

Joe and I love hearing other couples’ proposal stories.  We found Bree and Nick’s story beautiful, inspiring, and very creative!  We hope you enjoy reading about their engagement as much as we did!  -Ann

My name is Bree and after finding your site, I looked around for a while and was very impressed with the passion for adventure and life you as a couple possess, but ultimately I was impressed with Joe’s three requirements for a proposal.  He mentioned that he’d like to hear proposal stories at the end of the page; well, I believe I have one for you…

Nick and I had dated for about a year and a half.  For the last few months, we’d discussed getting engaged since our past histories were not the most stable, and we wanted to make sure we took our time discussing everything that you can possibly discuss before you actually experience those things in marriage.  We were thinking of having another summer apart (he lived in California, and I in Arizona) and then getting engaged that fall sometime when we went back to college for our junior year.  Then I found out I was accepted to a semester abroad program at Oxford University.  Needless to say, our engagement plans changed as it seemed the relationship would truly be tested through such a time apart, more than double anything we’d experienced before.  At the end, we’d know whether or not it was “a go.”

Before he left for college and I flew to Europe, I went to visit him for a week in California. We had decided not to talk about anything related to marriage on the visit, yet his mother insisted we look at reception sites in their area for a second reception in California, in case I did not have a chance to come out and look again.  I reluctantly agreed, as did Nick.  We looked at two sites that were quaint but not what I was looking for, even if someone else was going to host a reception for us.  Nick’s mother informed us she had an appointment at one more location that we had to visit that evening, because the grounds were scattered with landscaping lights, topiary gardens, a pond, and more, which all looked best lit up at that time of night.

Nick and I went a few hours later to see this location just as the sun was going down.  What a place!  I knew the moment we started driving down the tree-lined drive and approached the massive, Southern-style mansion that I could easily see an elegant, classy reception taking place on those grounds.  We met the owners of the house and they told us to look around outside; Nick took me towards the pond and we took our time, holding hands and talking about the future (despite our best intentions not to).  California summer evenings are just perfect, tame and lovely with hardly any disturbances like bugs, even though we were walking around a pond.  The walk brought us to the dock, and then Nick kissed me and said he would miss me when I went to Oxford.  Still holding on to this bittersweet thought, we walked through the nearby topiary garden, and it was then that I became suspicious. 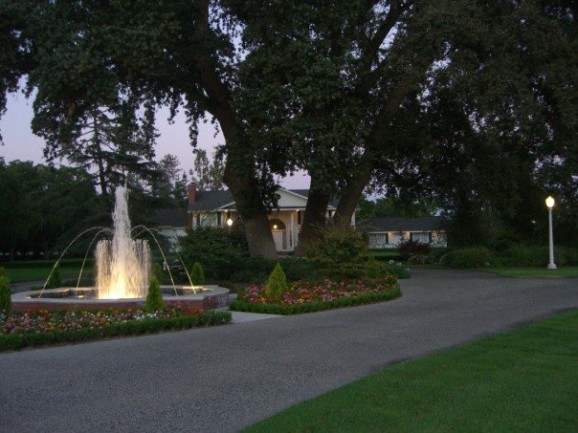 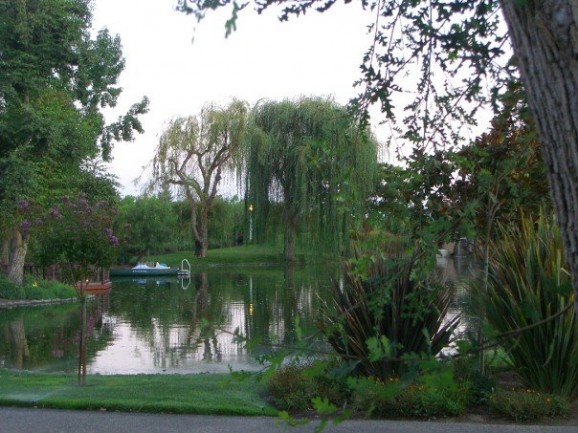 Ahead of us was a gazebo.  I had told Nick that I had wanted to be proposed to in a gazebo; call it the romantic in me from watching Gilbert say goodbye to Anne in a gazebo in Anne of Avonlea.  In the gazebo was a patio table and two chairs, the table being decked with a bouquet of roses and other summer blooms and leaves.  Also on top was a pair of champagne glasses, a bottle of sparkling juice, and a miniature gazebo model.  As we walked in, all I could sputter was, “Wait, are you… is this really…?”  I turned at the table to see Nick drop to one knee, pick up the miniature gazebo model, and hold it up to me. Inside was a princess solitaire in white gold, also the exact type of diamond I had wanted. I didn’t need any other reasons to say “yes.” 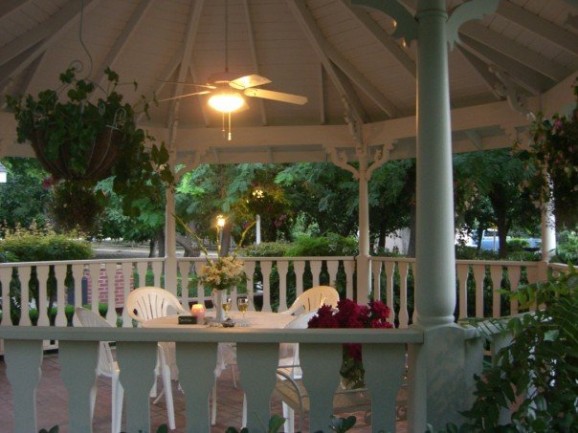 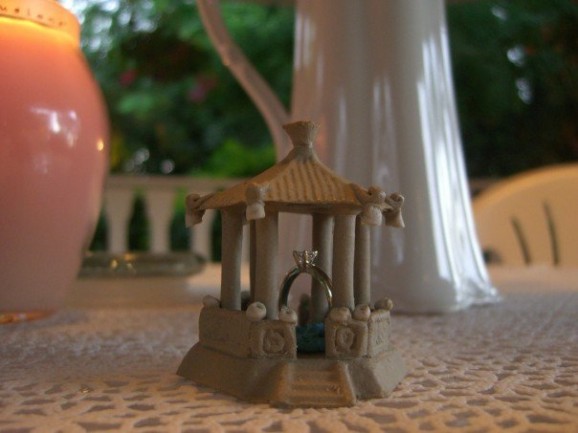 It was only after the proposal that I found out I had plenty more reasons to say yes to this man.  He had met all your requirements for a proposal.  First, he was intentional; he knew that he wanted to marry me despite the hardships a semester abroad would have on the relationship, and wanted to ensure that we did not take that relationship lightly despite the distance.  He had also planned this out for at least a month in advance, not finding a nice gazebo location and ready to settle for an older one in a park, but then searching desperately for a location that had a nicer gazebo once my mother told him he better find one or the proposal would be a severe disappointment!  Second, he definitely had me captivated; I did not see a second of it coming.  Not until the gazebo, at least.  I fully expected this location to be a reception site, not a proposal site.  Third, he sacrificed a few months’ worth of savings to hand-pick my diamond and setting.  Nick has a special interest in jewels and stones, so he went to his local jeweler whom he knew personally, told him to get the best and cleanest diamond he could, and paid extra for its clarity and cut, despite the size being smaller (below a half carat).  This is where I definitely agree that size and style should not matter to anyone else but the couple.  In addition, to pay for our honeymoon and starting life together, Nick sold his truck, a high-quality Ford racing truck he’d owned all through high school and loved like a pet!

Now, I disagreed with you on some points like “all women deserve diamonds.”  Some women simply don’t like them, want them, or need them; one friend of mine received a pearl engagement ring, which is exactly what she wanted.  Just because something is traditional doesn’t mean it is for everyone. 🙂  However, on the whole I appreciated your honest efforts and thoughts you put into not only your proposal, but the genre as a whole.  I enjoyed reading your story; I hope you enjoy ours.