I have spent my entire adult life in ministry.  Literally years at Bible college and years of going to church and never had I heard anyone try and unpack the personality of Jesus.  Yes, I have learned a lot about Jesus.  Yes, I have heard all the stories.  I’ve read them hundreds of times.  Yes, I have been through doctrinal classes and dissection classes where we broke apart His words line by line.  But I have never heard an attempt at capturing His personal character.

After reading John Eldredge’s new book Beautiful Outlaw I feel like I can more deeply experience Jesus as He is instead of what I project Him to be.  And there is nothing more amazing or important to Ann’s and my life than how we see and approach our King Jesus.

I love that John starts out his book with this:

More words about Jesus are helpful only if they bring us to an experience with him.  We don’t need further speculation or debate.  We need Jesus himself.  And you can have him.  Really.  You can experience Jesus intimately. You were meant to.  For despite the vandalizing of Jesus Christ by religion and the world, he is still alive and very much himself.  Though nowadays it takes a bit of uncovering to know him as he is.  A simple prayer, at the outset will loose encounters like a landslide:

Jesus, I ask you for you.  For the real you. 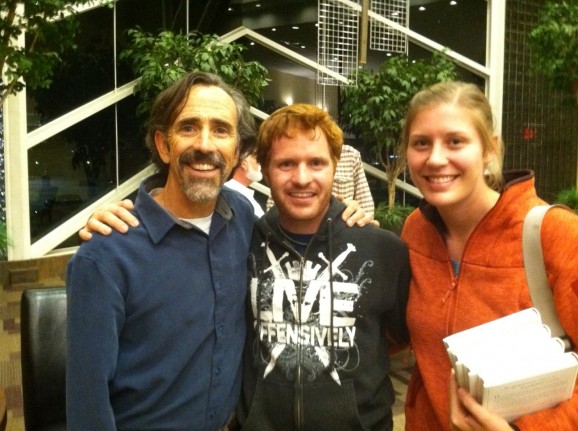 I have been blown away!  John masterfully articulates Jesus’ personality and shows how magnificent a man Jesus was.  As I read Beautiful Outlaw I became immediately captured by the very character of Jesus Christ.  All of the religious drab fell off of him and I was able to see Him as the perfect man.  A man I can worship.  A man who can only be the Son of God.  A man I long to be like.

There were lots of qualities of Jesus that I had never noticed before but I was most intrigued by His playfulness.  I wish that I would have learned this in my boyhood youth.  As a boy Jesus seemed so serious.  To be serious was to be like Jesus but to be playful was naughty.  Oh how that hurt my young heart.  It was redemptive for me to realize how humorous He is.  And all along it was right in the text.

Here is an excerpt from the book on page 23:

After all it was God who gave us a sense of humor.  Do you really think Jesus came to take it away? Maybe if we allow Jesus the playfulness we see in his creation we can see him at play in the Gospels. Perhaps it will help us unlock some of the otherwise perplexing stories.

After Jesus and his disciples arrived in Capernaum, the collectors of the two-drachma tax came to Peter and asked, “Doesn’t your teacher pay the temple tax?”  “Yes he does,” he replied.  When Peter came into the house, Jesus was the first to speak.  “What do you think, Simon?”  he asked.  “From whom do the kings of the earth collect duty and taxes–from their own sons or from others?”  “From others,” Peter answered.  “Then the sons are exempt,” Jesus said to him. “But so that we may not offend them, go to the lake and throw out your line.  Take the first fish you catch; open its mouth and you will find a four-drachma coin.  Take it and give it to them for my tax and yours (Matthew 17:24-27).

What?  This mighty strange little story.  Why in the world does Jesus send Peter off on a quest to on a quest right out of an Irish fairy tale?  “The Apostle and the Salmon of Gold.”  We’re talking about a few dollars here.  What is with the fishing trip?  If you remove the actual personality of Jesus from the scene–and insert that religious, ethereal, ghostlike personality gazing off into realms unknown, the image of Christ conjured up by so many paintings and Sunday school art–you wind up with some pretty bizarre interpretations.

That the open mount of the fish, as one commentator has it, represents the open hearts of people who will receive the gospel as Peter becomes, after the resurrection, a fisher of men.  An exercise of hermeneutical contortion worthy of Cirque du Soleil.

Contorted interpretations based upon religiously bizarre images only serve to push Christ further off into the ethosphere.  “And by their fruit you shall know them,”  warned Jesus (see Matthew 7:16).

But with his personality front and center, these stories take on a richness we have missed.

Peter has taken an enormous risk hitching his wagon to Jesus.  The little band of minstrels have passed the raised-eyebrows stage and are about to enter the periods of opposition to Christ–the pitchforks and-torches stage.  Peter is confronted by the elders of his own village with a troubling question.  He comes into the house visibility shaken, and sees his master standing at the counter chopping vegetables.  There is a moment of silence, while the pang of doubt shoots through his mind: Perhaps the Master is not as righteous as we thought; he does not seem to keep the law.  Jesus does not look up; he simply says, “What do you think, Simon…?”

“Peter, I’ll tell you what I need to you to do…”  He sends the fisherman fishing.  He gives him time to sort things out. He shows him there are higher laws to live by.  Jesus has a sense of humor.  Without a deep confidence in that, the story is simply bizarre.  But with that understanding, it is a beautiful and very human and also immensely funny story.  The fruit of which is only to make us love him more.

To be honest I had never understood this passage until now.  Almost like I had been watching a 3D movie without the glasses.  And now that I am alert to the personality of Jesus I feel like I can grasp so many other passages in the New Testament.  I’m excited.

John has offered all of his teachings on iTunes absolutely free.  Check it out here.

He is hosting a live event over the web on November 14th.  Check it out Here