I wouldn’t call it the third wheel, but part of the wheel. 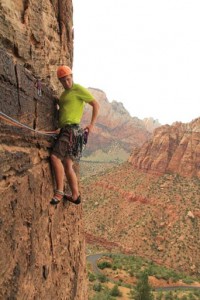 As we continued the treacherous four hour hike to the top of Imlay Canyon, rated in the top three most difficult and dangerous canyons in all of Utah’s Zion National Park, the thought of being trapped for hours in dark hypothermic pools of stagnant water loomed through everyone’s mind. Our guide for this venture said he never dared to rappel into this canyon without bolts, a hammer, and a hand drill, and no one’s been through it in a month. The last group that went in got critically injured, spending two days in the canyon, and needed to be rescued. And the rescue report wasn’t too promising on what we would find.

I’ve traveled extensively with Joe and Ann on the road for the last four summers, and as adventurous as I am, there was no way I was going to turn down the opportunity to go with them on their “second” honeymoon to Zion National Park. I know Joe was excited for me to come, but he wasn’t too excited that Ann was just as thrilled that I would be there. Since I’ve had my share of adventures with both Joe as well as Ann, the dynamic of going on a trip like this with them being married didn’t take too much adjusting (minus the times I would get kicked out of the hotel room, if you know 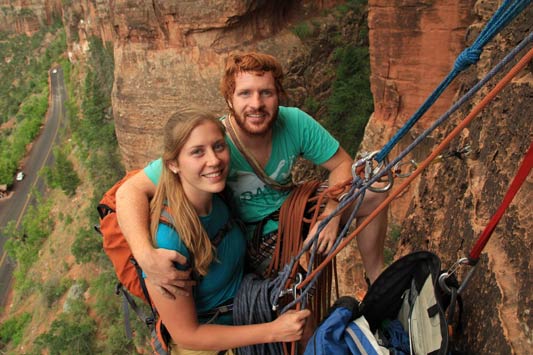 Zion National Park is one of the most beautiful and magnificent places I have ever seen in my life. It’s places like this that truly prove the existence of God. The awe and beauty of huge spires over looked us as our car zig zagged down the side of the mountain into the center of the park. Some of these spires take days to climb, only to be done by the best climbers in the world, and we were there to take our shot at
some of them. 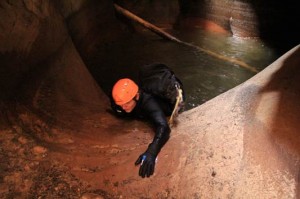 While we were there, we did spend some time climbing shear walls, though not as much as I would have preferred. Instead, most of our time was spent canyoneering through the vast slot canyons hidden away throughout the park. I want to clarify that climbing and canyoneering are two very different sports. There is basically no climbing involved in canyoneering, which consists of hiking to the top of a canyon and then rappelling down in. Canyon lengths can vary from just a few repels to fifty or more. What makes canyoneering really interesting is that whenever you start a canyon, there is no retreat. You must to keep rappelling until you reach the base of the mountain. You never know what the water level will be or the amount of debris contained within the canyon. It can get dangerous if you rappel into an empty “pot hole” without the right equipment to pull yourself out on the other side (especially if you’re used to just swimming across it). 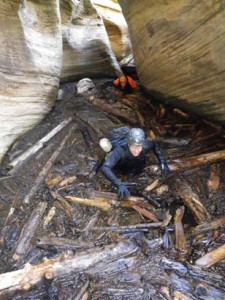 Additionally, rain from 20 or more miles away can cause canyon flooding in a manner of minutes. The threat of drowning was instilled in the back of our minds, only to be drowned out by the idea of being impaled by debris, the greater threat of canyon flooding.

We had made the journey to Zion to experience the best it had to offer, and a rarely explored canyon was a must for us to truly experience God’s awe and beauty in that place. And in knowing that, we willingly choose to rappel into the depths of Imlay.

I think it is also important to clarify that we would never climb a mountain or rappel into a canyon that the Holy Spirit directed against. Scripture is full of examples of people hearing and being led by God. Psalm 37:23 says, “The steps of a good man are ordered by the Lord, And He delights in his way.” Romans 8:14 says, “For as many as are led by the Spirit of God, these are sons of God.” If anyone of us felt that God was directing against such a trip, we would seriously reconsider our plans. A recent example of this is our decision not to climb El Capitan in Yosemite National Park. The three of us were discussing heading to California to spend five days climbing this 3,500 ft behemoth. However, as much as I personally wanted to take a shot at this mountain, I did not feel a peace in my spirit about climbing it, and Joe and Ann agreed it might not be the best idea. Now I don’t necessarily know if anything would have went wrong, but I perceived that God wanted me to instead head back to Missouri and prepare before I headed into my third year in campus ministry on the UCLA campus in Los Angeles.

When we made the decision to descend Imlay, we made sure we had the right equipment. Additionally, we were all competent in rappelling and had a highly experienced canyoneering expert with us who had already explored this canyon numerous times and was leading the expedition. The rescue report was exaggerated on the condition of the canyon and the water levels were high for the most part, making the escapes easier than expected from the sometimes treacherous “pot holes”. The trip was still highly technical, though, and wasn’t what you would call “easy”. There were definitely parts of the canyon that would be life threatening for novices. We had the experience and equipment necessary to escape unscathed, though an inexperienced group could easily get trapped for days.

The last two rappels were some of the more enjoyable ones, first rappelling 100 ft into a deep beautifully enclosed pool followed by short swim to the last rappel. The last one emerged 150+ feet over the Narrows, a vast canyon with towering walls that tourists frequently hike through due to its easy accessibility. The reaction of tourists watching us emerge from the hidden canyon overhead was priceless as we rappelled down from seemingly nowhere in full wet suites. Though the canyon was not as difficult as expected, I think a more important gauge in difficulty is the toll it took on our bodies, which were so exhausted that we couldn’t do anything the next day before we headed out. 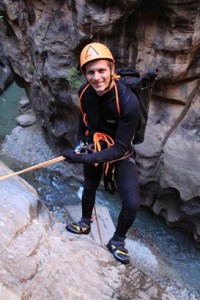 This article was written by one of Ann’s and my best friends, Bryan Citrin. He is a full time missionary to the University of California Los Angeles – with Chi Alpha Christian Fellowship. If you’d like to read great blogs of faith and ministry in action, please visit Bryan’s website at: www.supportbryan.org.