One of the things that I have been thinking a lot about is what a marriage covenant is. A covenant between two souls is such a wild idea. The Bible says that the two us, Ann and I, actually become one flesh. I read through Genesis chapter one and two again today to try and get a handle on this and noticed a few things. 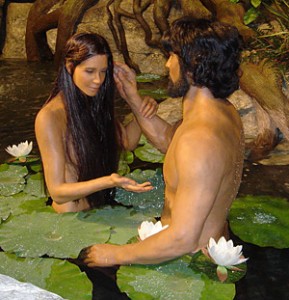 First of all, I find it interesting that God made everything perfect and yet something in the garden was “not good”. The only part that was not good was that Adam was alone in the garden. I mean Adam had everything that he needed, including an intimate alliance with God himself. Adam was made perfect and yet God says in humility (I’m paraphrasing of course) “I am not enough for Adam”. And so God makes a mate for him. However, God does not go out and arbitrarily make an androgynous mate for Adam, God somehow removes parts of Adam to make his match. The text indicates that God takes bone and flesh from Adam, but I imagine that he also split Adam’s soul. The text then says that he creates Eve from Adam and then brought her to him and together they are one flesh.

Read this verse in Genesis 5 and try and follow my logic: “In the day that God created man, in the likeness of God made he him; Male and female created he them; and blessed them, and called their name Adam, in the day when they were created.” If I were to write a line like this in fourth grade english class I would flunk for sure. The plurality is all out of whack. How is it “he called their name Adam?” Since when is the name Adam plural? Shouldn’t it be “He called their name Adam and Eve”? Since I believe the scriptures I must assume that God is trying to tell me something with this funny word trick.

What if when God looked down at Adam and Eve he saw them both as one flesh just like when it was only Adam in the garden? Since Eve came out of Adam and the two are rejoined as “one flesh,” then together they equal one.

God originally made Adam to bear the image of himself. Since God doesn’t have a body Adam’s soul must be what God is talking about. Somehow Adam’s soul originally looked like God. But then God pulled Adam apart and put part of that soul into Eve. Now only together does God refer to them as Adam. Male and female they are one. Just like their is a mystery to the plurality and singularity of the Trinity, so it appears there is a mystery to the plurality and the singularity of a marriage. A marriage makes two become one. Maybe this is why God hates divorce so much because one is impossible to divide. I can’t think of any complex things that can be divided in half and still be functional. It seems as though God being relational at his core wanted to make us as relational. Being one with Ann means that I must become some what dependent on her to live and she must become dependent on me to live just as we both are dependent on God to live. And the trinity emerges. Just like God has a self sustained trinity in himself now man is able to partake in such a relationship. A man, a woman, and God himself all connected at the soul.

So in other words, from these texts I can conclude a few things. One, I am incomplete without a mate. Once I have made a covenant with Ann I am no longer one in myself but I am one with my mate. The two of us will soon become one. June 11th to be exact. I’m not sure how this works but once I’m married I suppose at some level God will look down on Ann and Joe and see “Joe”. He sees us. He sees one full representation of the ruins of his own image. (And I say ruins because we’re not pond scum but we are not anything like the glorious original either). Together in marriage somehow Ann and I represent the image of God in a way that neither of us can show the world by ourselves. We can offer the world so much more as a couple than either of us can offer alone.

I would love to hear your thoughts on my ideas about these verses.